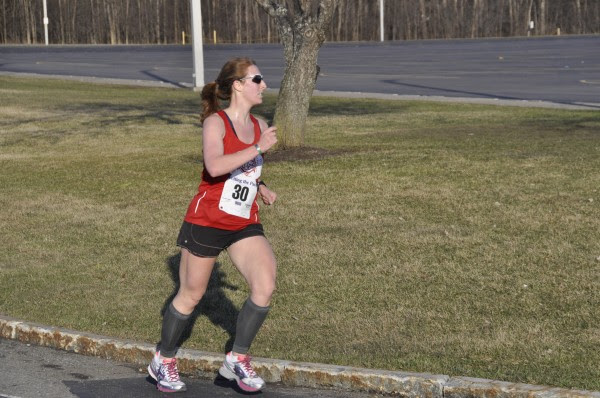 As many of the ladies, my significant other has been a Road Kill Runner for a few years. When encouraging other women to run for this team, we never ask what their PRs are… we ask if they want to run “for beer and glory.” This has helped us to build a very dynamic team of people that are running for the love of the sport, camaraderie, and….winning the occasional beer.

I transferred into SUNY Brockport for my sophmore year of college wear I met Dave Rappleyea and my husband, Matthew George Roberts. There, I was a back of the packer who ran for a distraction from school work, fitness, and to hang out with some of the strangest, most outgoing people on campus! In college I learned that running is a lifestyle, and I embraced it.

About 6 months after college I trained for and ran my first marathon in Disney. After I got over the idea that I would never sign up for such a crazy event again, Matt and I decided that we’d start running marathons in different states (with the hopes of completing all 50 states one day). Between injuries and graduate school, I’ve trained the best I could and I’m due to complete my 10th full in the fall of 2014.

With all of the marathon training (with Oven Door Runners) and sporadic 5ks, Freezeroos, and half marathons, I’ve slowly become a “middle of the packer.” It’s great to see hard work pay off, any whether it’s measured by a fast time, running a further distance, or completing a difficult course. Post-collegiate cross country is a new adventure for me and I’m excited to don my red RKR jersey and hit the trails with some of the finest, dedicated female runners in Rochester!