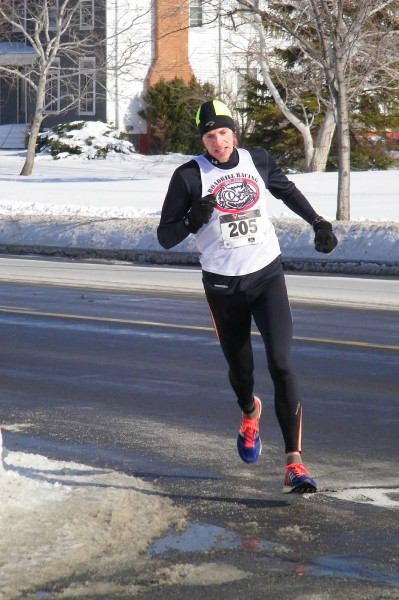 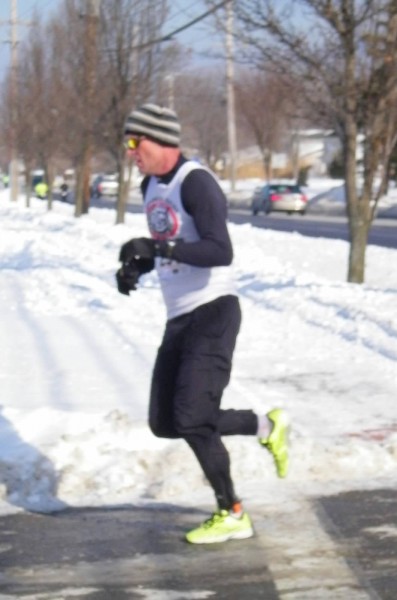 Another 5k has come and gone and my PR remains stuck at 16:06.  It has been stuck at 16:06 for 9 years now and at 38 years old one has to start to think that is as fast as I’ll ever run a 5k.  There are some signs of hope no matter how distant, I did run a 16:17 early this spring, and it isn’t crazy to think that on the track and on the right day I could catch lightning in a bottle and squeeze out a few more seconds per mile.  But every race that goes by the likelihood lessens, and I’m not running 2 or 3 5k’s a month like I use to so the opportunities for success are much less common.  So when a flat fast race with good competition comes around and I put in a mediocre performance, I have to wonder if it really was a mediocre performance or if it was as best as I can expect these days.

OK enough with the melodrama, and on to the race report.  Saturday morning was the Safe Journey Scarecrow 5k in Fairport, NY.  Aside from being a bit chilly, probably 37 degrees at the start, it was a beautiful morning to run a race.  The race is essentially an out and back on the Erie Canal Trail, even though most of the out you do on the road and most of the back you do on the canal trail itself.  I am very familiar with the course as it is basically in my backyard and I am a tad obsessive when it comes to researching a race before I run it.  This will come into play in a minute.

I jogged the course for my warm-up then met Kenny at the starting line.  This was a money race, $100 $75 $50 and then $100 for first masters runner, so I expected a bit of competition but their was also another race in Greece giving out money so the local elite field was a bit split.  The only real burners i noticed at the start were Mark Andrews a very fast 41 year old and Mark Streb fairly fast 23 year old and of course Kenny Goodfellow.  As seems to happen in all these local races several high school kids took off very fast and by 400 meters out faded out of the picture, but Mark&Mark, Kenny and I stayed in a pack to about the 1 mile mark which we hit in a little over 5:12.  I was disappointed in this start as I was hoping they would pull me through in closer to 5 flat, but I was still feeling good so I wasn’t too upset.  Almost immidiately after the first mile M&M+Kenny began to pull away from me, so much for feeling good.  It was one of the those typical race situations where one second you are with the pack then next thing you know you’re 10 seconds back.

We hit a water stop about a few mintues later, and Mark Streb decided to turn around.  The other Mark and Kenny decided to follow him.  In the span of about a second I had these thoughts, “Screw it I’m going with them 5k is too far to run anyway, screw it I’m going the right way and winning a $100.”  What I did was stop and yell as loud as I could “THAT ISN’T THE TURN AROUND.” and then I kept going on my merry way.  The fancy graphic shows what happened.

Because Kenny is my teammate, and teammates trust eachother, he immediately turned around and caught up with me very quickly.  The other two kind of slowed down and looked around and I don’t think they were conviniced until the people at the water stop finally started yelling at them as well.  I’m not entirely sure because one Mark was very thankful that I told him, and the other seemed to imply he was only saved by the water stop people… so who knows.  I don’t know that it really had an effect on the final placements for the race, but it defiently cost us all some time.  I guess I lost 3 seconds or so Kenny a few more and it probably cost the M&M boys a good 15-20 seconds.

When we hit the 2 mile marker I was back in 4th pace where I belonged with the other 3 pulling away from me.  I knew I lost a little time with all the craziness, but I was still shocked I was at 10:37, I didn’t think I ran that slow.  I tried my damnedest to push the last mile of the race, and I really felt like I was going fast, but I split miles 2-3 in 5:20 and kicked it home in 31 seconds.  While 4th place and 16:28 is nothing to be ashamed of, I really felt I was ready for a brush with 16 flat.  Kenny despite the wrong turn, turned in another great race performance and finished with a new PR of 16:12.  He is just one right turn away from breaking 16 minutes!

Luckily for me Mark Andrews is old, and took home the $100 masters money, so I was given the $50 3rd place prize money.  Kenny who got out kicked by him in the last minute of the race got bumped up to 2nd and $75.  All around it was a not a bad day for Roadkill Racing.