Living in Pittsburgh now, I’ve unfortunately been mostly absent from Roadkill events and shenanigans over the past two years. However, I saw a Facebook post by Lindsay in December saying that she was looking for “fast men” to fill out the Seneca7 team. I saw how much fun the team had last year, and I had never gotten to jump in on a relay like this. It was a great opportunity to see old friends while chasing everyone around a lake.

Fast forward a few months to April 28th, and Roadkill had a formidable team of George, Ashlie, Marie, John/Lindsay’s Dad/Mr. Rynders, Chad, Lindsay, and myself for the 77.7 mile journey around Seneca Lake. We came into the day slightly battered (Marie having run the 18 mile Rally Round the Valley the day before, George and Ashlie deep in the meat of their own marathon training, and Lindsay and I still recovering from the Boston Marathon). However, we were ready to race for beer and glory and ice cream and effort and everything that represents the Roadkill way. The day started out chilly and breezy in Geneva, but that didn’t stop George from sneaking his short orange shorts that Ashlie REFUSED to let him wear. Soon enough, 9 o’clock rolled around, and George was on his way, starting towards the back so he could get a headstart on roadkills early (roadkill, in this sense, meaning any runner you pass in your travels).

The race has twenty-one legs, with each team member running three legs of varying distances, in the same order. I was given the seventh leg, with George, Marie, John, Lindsay, Chad, and Ashlie preceding me. After George set off, we hung our Brazilian flag (the official mark of a “passing” vehicle) and Roadkill banner off of the Splatmobile and bolted south. The first few checkpoints were mostly empty; the earlier-starting teams were already long gone, and it was mostly a race for the best parking to make a quick escape. Towards the end of the first seven legs, however, we started to come up upon some earlier teams and gaining roadkills. (The Splatmobile passengers had a side-competition to make the greatest number of dad jokes for the day, and with a grand total of one, I think I lost that game). A little before noon, though, Ashlie hit me with the slap band and I was finally off on my first leg, a mostly uphill 4.1 miler. It was an odd combination of freshness and stiffness as I tried to get to the next checkpoint as quickly as possible. Around 22 minutes later, I attempted to hit George with the slap band, missed, then got an accelerated cooldown as we hopped into the car into the oblivion of inevitable stiffness the next time I tried to run. 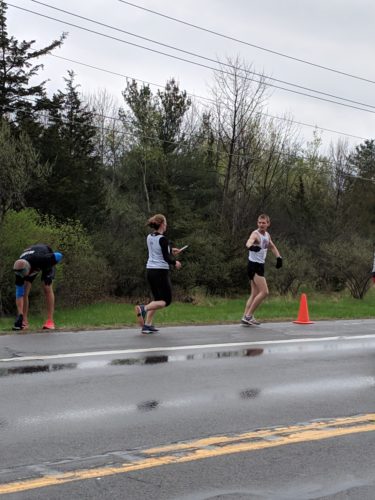 Fortunately, there were no snowflakes to be seen, but as we approached the southern shores of Seneca Lake, the breeze had picked up, and checkpoints were becoming more and more crowded. Nevertheless, we braved shorter and shorter warmups and tight muscles as we repeated the pattern of collecting a tired runner and driving quickly but carefully to the next checkpoint. I don’t remember much about my second leg, a slightly downhill 5K, but I think I finally got the hang of hitting George with the slap band.

The last few checkpoints began to be a cacophony of relay teams of all backgrounds as well as spectators enjoying a delicious Sunday afternoon brew, which became more and more tempting at this point. We never were in danger of missing a runner at the next checkpoint, a distinct possibility with crowded roads and parking lots, but we were still cutting downtime pretty close. Spirits were still high as roadkills kept accumulating. Soon enough, we made it to the final leg with the possibility of finishing in under 9 hours! The sun was finally shining, and as I made it back into Seneca Lake State Park, the team joined me to cross the finish line, although I bolted not realizing I still had a couple minute buffer. In retrospect, I probably could have made it a little less fanfare-like. Sorry, guys.

Although we were cold, hungry, and tired, it was a successful day for Roadkill. We ended up 9th overall and 6th co-ed in a time of 8 hours, 57 minutes, and 33 seconds. Personally, it was a much-needed catch-up day with my old team, and if the stars align, I can’t wait to join them again in a future year.

View all posts by Matt