My fiancé Don is a new member of Roadkill. He’s happy to be part of the team, although not nearly as fast as some of our other illustrious members. So when Matthew put out the call for creating a Roadkill team for the Bristol 10k, Don felt that he could help Roadkill. He may not be fast, but he’s tough and could power up those hills. I was on the fence about running it. I had just run Candlelight 24 and my quads were finally starting to speak to me again. But I’ve signed the poor man up for so many races, it was the least that I could do. (God help me!)

Unfortunately we were not able to form a team for the men. Erin, Molly, Ashlie and I were able to represent the women. Thank goodness they are the fast ones and I was told that I only had to cross the finish line! At that point, looking up at the mountain, I knew that this race was not going to be pretty.

The beginning of the race immediately started up the mountain. It was around 1.5 miles before we reached the top of the climb. The grade wasn’t terrible and I power-walked it. I wanted to conserve some energy and I thought that I could make up time on the descent going into mile 2.

Ummmmm…….no.
I was able to pick up the pace, but it was pretty steep. There was a path through the tall grass, but you needed to be vigilant. There were “ruts” (maybe to keep the snow in place on the hill during ski season?).
The climb going into mile 3 wasn’t too bad. At this point I wasn’t worried about time. I wanted to finish and earn the right to wear the race T (it was a pretty blue color 🙃). Another descent and a decent runnable portion…..then……

It became a matter of survival at that point. We were warned of this hill at the start, but I have never been afraid of a hill so bring it on!!
Holy Mother of …..
Halfway up, I seriously considered my odds of injury if I just gave up and rolled down. I also wondered it there was a helicopter rescue option available. In the end, it was the thought of watermelon at the aid station that gave me the strength to climb it.

It was a very nice aid station. Watermelon 🍉!!!!

The next section of the race was pretty nice. I believe that it is the cross country ski loop. After that it was basically all downhill (a steep downhill) to the finish line. I ran/ walk/ran/walk and tried a sideways kind of running. ( I avoided a face plant, I’ll count that as a victory) 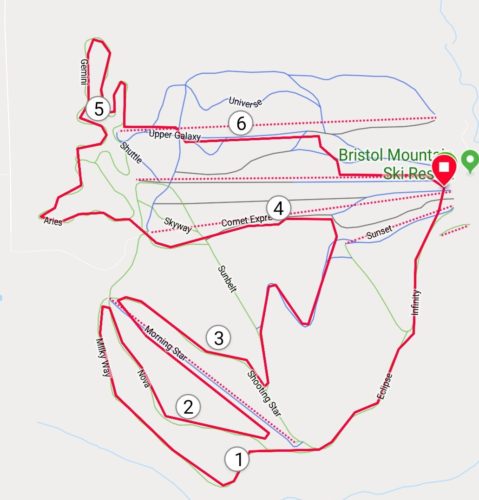 I swore that I would never “run” it again, but I would. 😜 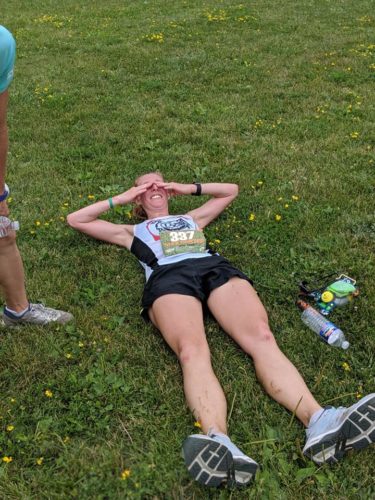 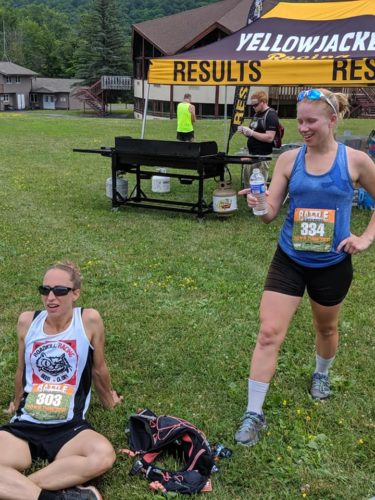 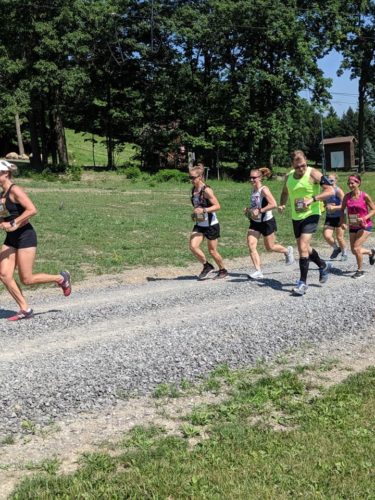