A brief background: January 26th (yesterday) was my 22nd birthday. I had come up with the idea well in advance that it’d be “epic” to run 22 miles to celebrate my birthday. A good friend made a spectacular running route that was a spectacular Tour De Rochester: my Run For Glory, so to speak. That word Glory grew from being a notion of physical undertaking to one of heightened understanding. Map of The Run For Glory. 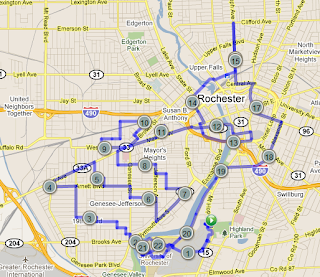 I dedicate this run (and likely many others in the future) to both my dad and mom: who not only have instilled in me the ability to overcome obstacles, but also understand far better the difficulties and turmoil of a true endurance event than I probably ever will.

The preparations: I wanted this thing to go as smoothly as possible, and with some of the stomach issues I’ve had on longer runs I wanted to prep correctly. My intention was to not stop the whole run and just keep turning it over. While training last week was very heavy by jumping up to 15 hours from about 11 or 12, I thought an decent length but easy run/ride Sunday, real easy Monday, and easy ride Tuesday would give me sufficient rest. It was definitely enough, but I surely could have chosen a better time to amp up the training rather than last week. Nevertheless, last week was one of my more solid weeks of training across the board – even with all the rough temperatures and weather. I had my longest run ever (at the time) and am getting some proficiency on the rollers. Plus I got back into swimming even though it is only easy stuff and simple drills. So I woke up my usual 2.5+ hours before and got peanut butter jelly banana toast with honey on top. It was so delicious I considered a couple more slices of toast with it but figured that’d not be a good call. Drank some water and kicked back to a bit of COD Black Ops. I made sure my “quarterback” wrist direction card was set to go, without it I would have been quite lost after about 8 or so miles. 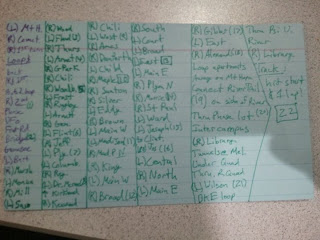 (About 110 turns that ensure the perfect route through Rochester)

The Epic Departure: With a quick tap of the watch, we were off: Tyler and BroBot holding hands (with us for 20m), Tyle, Chanse, and myself. And soon we found ourselves making our way towards the graveyard, moments after the 7:32AM sunrise (insert Ezra’s mock-poetry about light and sunset/sunrise or whatever here).

The run overall was so natural, except the very initial conception and presentation of the idea – as the outside support made it seem far more reasonable and less abstract. My first thought was it had to be forced: when I thought of this idea my longest run ever was 15.5 miles and occurred on September 2, 2007; well over 3 years ago. But over the preparation it quickly became simply an opportunity, something to be excited about. During the run I felt purely detached from the commitment of completion or the failure of coming up short: I just took it all in and experienced pure enjoyment of the moment.

For the full entry on this run: My Blog includes a full mile-by-mile recount of the run.