With the explosion of new Roadkill Racing team members over the last year, I thought it would be useful to get to know everyone a little better. Roadkill Racers are a varied bunch. Our youngest runners are in their late teens and still in college, our oldest are enjoying retirement. We have hot singles, and hotter married couples. To help you sort out who’s who I’m introducing a new weekly feature to the blog titled “Know Your Racer.” Each week I will profile a Roadkill Racer by having them answer a series of mostly running related questions.

First up is Lynn Gottfried. 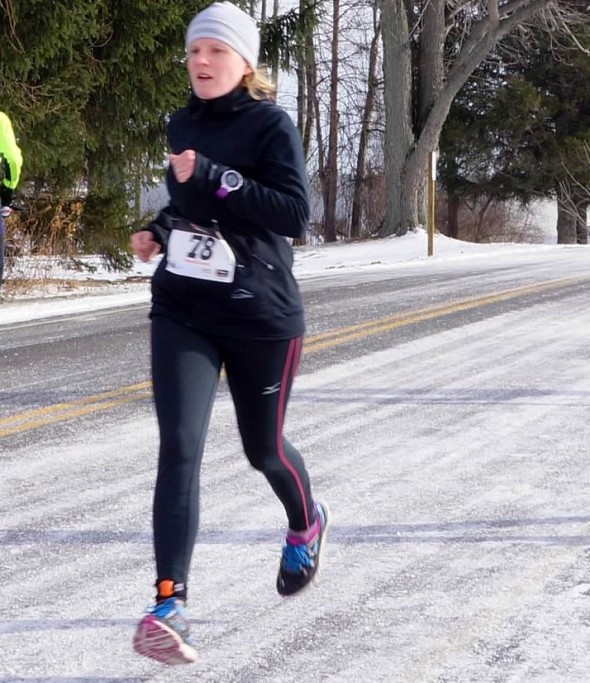 Lynn has been a member of Roadkill Racing since last summer and is married to Jason Gottfried who is also a Roadkill Racer. They have a young son named Alex. I’ll let Lynn tell you the rest about her.

What is the first race you remember running?

What is your favorite distance to race?

Definitely 5k! Since I started running, I have raced alot of different distances except for the marathon. Over time, I have found that I enjoy training for a 5k the most, and I seem to have a natural strength at that distance.

What is your favorite race or running event?

I really enjoy team events and relays. There’s something so motivating about competing as a team, whether it’s in a cross country race or fun relay. I’ve competed with the team in cross country, and I have also been on several marathon relay teams as well as one triathlon relay team. They have all been so much fun!

What is the strangest thing you have seen while out for a run?

I was running on the canal, and I saw a man on a bicycle with a live chicken in an attached basket.

Why did you join Roadkill Racing?

I was always intrigued by Roadkill Racing. I would see members of the team at races and running on the canal, and they always seemed so fast. Then, last June, 6 months after giving birth, I decided it would be fun to do the McMullen Mile. As I lined up at the start line, I noticed 2 women in my group wearing Roadkill Racing singlets. I never knew there was a women’s team! And these 2 women (aka Lisa Perks and Erin Mahoney), kicked my ass.

What races are you looking forward to this year?

I am really looking forward to the Lilac 10k. I will be coming off of a 12 week training plan, and I hope to see my pre-pregnancy speed make a comeback. Plus, I’m excited to compete with our women’s team because we are all getting so strong. I’m also really looking forward to the Bergen 5k. I got my 5k PR on that course in 2012, and I have been chasing a sub-20 minute 5k ever since. So I’ve got my sights set on Bergen 2015!

What was your best race ever (could be the best time your ran, or just a really fun racing experience or a race that just meant a lot to you)?

My best race ever was the Pink Ribbon Run in May 2012. I decided to run it at the last minute and went into it unsure of what to expect. I had run a half-marathon 2 weeks prior and was feeling pretty good, so I thought I’d give it a go. I don’t ever remember feeling as good as I did during that race. I felt strong, negative split the whole race, and took about 1:30 off my previous 5k PR. Plus I won a Wegmans gift card, which was my first ever $ award!

If you could give 1 piece of advice to a new runner what would it be?

This is going to sound so cliche, but, first and foremost, don’t give up. Trust the process, especially if you are starting from the very beginning like I did. At first it will feel impossible, but you CAN do it. Following a solid plan with some good running shoes and a running buddy in tow will take you places that you didn’t realize you could go. It also helps to choose a goal race. That will keep you focused and motivated.

There is another group of “new runners” that I feel is often over-looked though – postpartum women runners. For many of us, the return to running after having a baby can make you feel like you are starting all over again. So, in many ways, you are a “new runner”. You are running with a new body, oftentimes a new baby in a jogging stroller, and a new schedule. Depending on how much you did or did not run during pregnancy will affect how you feel. For several reasons, I ran very little during pregnancy and not at all during the last 4 months of it. Based on my experience, my advice is this: ease back into it and don’t be hard on yourself. Take your time. Don’t risk injuring yourself. You will eventually feel like your old self. If anything, you will probably feel even better! It also helps to have running friends that are also moms and can understand what you are going through. Over time, the baby weight will come off, your runs will get faster, and you will really enjoy your “me time” when you go out running. But PS – running with a jogging stroller is HARD, so be prepared.