The fastest road race of the year in Rochester is the Bergen 5k.  It isn’t so much that the course itself is that quick, it is fairly flat but not the fastest in the area.  It is simply the absurd level of competition that comes out for the race.  Most 5k’s, even those giving out good prize money like the Hospice 5k are very top heavy.  They have a few guys running around 15 minutes then a few more in the 16’s until the masses start piling across the line at 18 minutes plus. 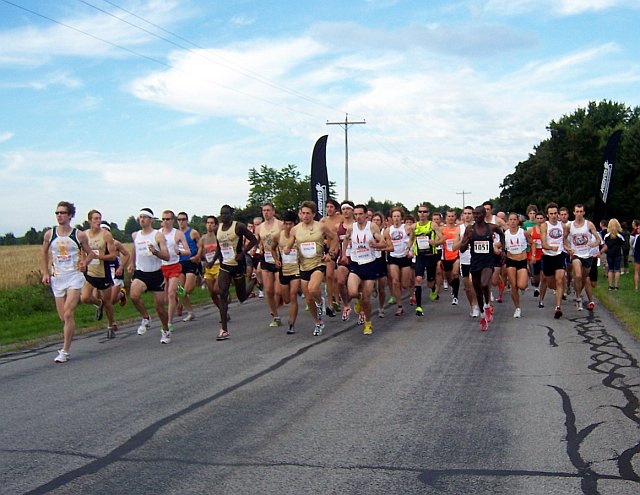 This year’s Bergen race had 3 runners under 15 minutes, 20 under 16 minutes and 45 under 17 minutes including 2 women (one of them being Jeff’s wife Jen who ran a PR of 16:40!) RKR had 4 runners in the race and everyone had a great day. Chanse lead the team with an 8 second PR of 16:07, and was closely followed by Jeff and I in 16:13 and 16:15, the fastest times either of us has run in a few years. Matt who is in the midst of marathon training, and who continually insists he doesn’t have any speed right now, ran 16:25 which is 1 second off his 5k PR. Full results here.  In other racing news Rob ran the Innovative Edge Cobbs Hill XC race and finished in second place with a time of 17:57 .

The team is really looking sharp and ready to go for the Upstate NY XC Series which kicks off in Syracuse on September 18th.  As always I need to thank the good folks at Rochester Runner Pics for all the great photos.