Technically this was not my first marathon. I completed the Rochester Marathon in September 2008 in approxmiately 3 hours and 48 minutes. That race was a horrible experience for a few reasons…most significantly because I had only been running for about 2.5 months after a hiatus of several years…I could go on but I’d rather not stir up those bad memories. That said, I’d prefer to consider the B+A Marathon my “debut.”

Also throughout this post, I’m going to take some digs at Josh because he’s the one who convinced me to do a marathon to begin with. I was (at best) lukewarm on the idea of taking on 26.2 miles, but Josh was ambitious. Why does that merit harassing him, you ask? Because in the midst of his hard training he went and got himself injured (see the post below). Mostly I’m just jealous because he’s faster than me now at anything shorter than 26.2 miles.

Race morning could not have been more perfect. There was no wind, overcast skies, and a touch of humidity with temperatures hovering in the mid to high 40s. Such ideal conditions helped to bolster my spirits, which were (again) lukewarm at best. My training had gone well in some respects but poorly in others. My mileage was crap (averaged 55-60 miles over the previous four months) but I did manage a number of very strong long runs and workouts. I knew I could run low-six-min pace with ease, but I was not at all confident that I could stick to it after 20 miles. 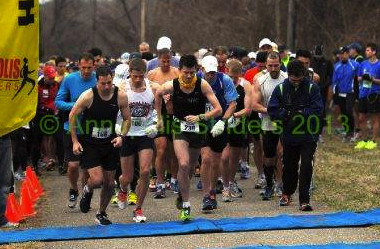 The race began promptly at 8am. The B+A Marathon carries a small field–only about 300 runners started the race. The fellow to my right in the picture above took an early lead but backed off after about a quarter mile (he would ultimately finish in third place), leaving me in the lead alone. Despite a deliberate effort to take it easy, I hit the first mile mark in 6:03. Undoubtedly the easiest six minute mile that I’ve ever run. At this point, I was happy that Josh was not present, because he probably would have run a 5:45 thinking it was a 6:10.

After two miles, a middle aged-looking runner came up on my shoulder and we ran together for awhile. He said he was looking to run “in the 6:20s” which sounded great to me. My (conservative) plan was simply to remain between 6:15 and 6:25 pace for as long as I could. We split miles 2, 3, and 4 in 6:14, 6:19, and 6:09. After the 6:09, my competitor accelerated a bit more, and I decided to just let him go. A quick glance behind me revealed that, unless he comes back later in the race, I’d likely be on my own for the next 22 miles. At this point Josh was (most likely) happily driving to Johnny’s back in Rochester rather than cruising through the early miles with me!

The next six miles flew by: 6:20, 6:25, 6:22, 6:11, 6:13, 6:23. I felt like a million bucks. My confidence grew with each passing mile: “I can do this, it really couldn’t be easier. Should I speed up? No! Don’t do something you will likely regret.” I sipped the road-side gatorade every two miles or so, hoping to fend off the inevitable late race fatigue. Had Josh been there, we could have comfortably maintained a casual conversation about how stupid Republicans are, or something.

Sometime in the eleventh mile, I detected the very first sign of fatigue. I was hardly noticeable and is now somewhat hard to describe. Instead of feeling 100% bouncy, the pace started to feel like it took a little effort to sustain. 6:17 and then 6:24. A brief and mild uphill stretch of trail took me down to a 6:33 13th mile. I still felt strong but mile after mile, I was tiring. For now, I managed to hold the pace: 6:28, 6:21, 6:22 miles tok me through 16 miles. Still no big deal but no small matter either. At this point, Josh was probably comfortably warming up for Johnny’s instead of suffering through the second half of a marathon with me! 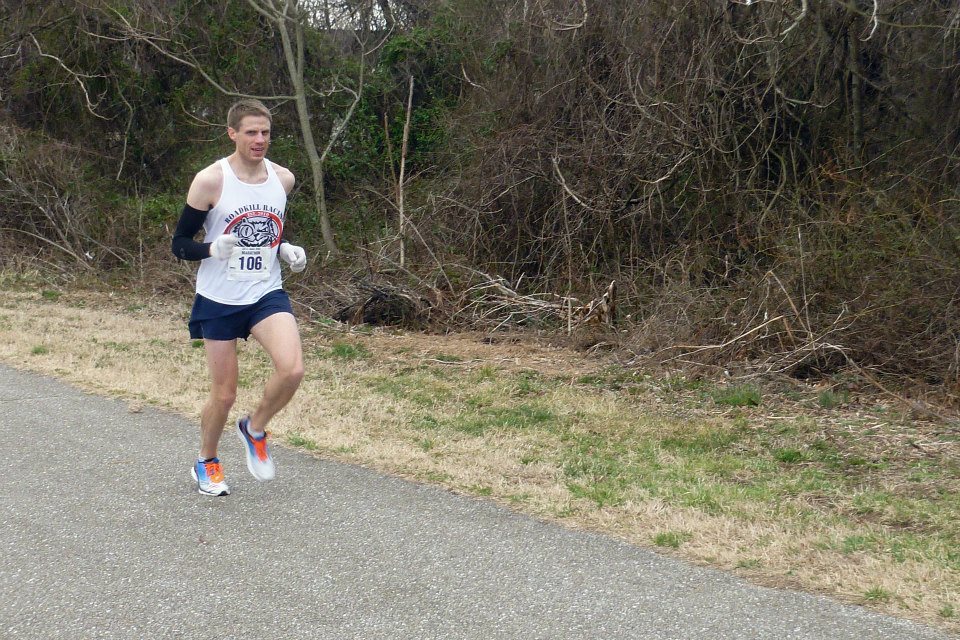 Miles 17 and 18 contained hills. Familiar hills near my apartment–not huge–that I run up and down nearly every day. Given my conservative strategy, I didn’t push here. 6:37 and 6:32. It’s also not hard to strike a deal with oneself to “take it easy, don’t risk it” after having run for nearly 2 hours.

A 6:22 and a 6:23 got me through 20 miles, now back on pace. At this point I was tired, period. Running 6:20 miles was now very hard. My legs were heavy and my quads felt terribly torn up. I could see the leader on the long straight sections of the trail, painfully far away. Bystanders informed me that he was 2 minutes ahead. I managed to do the math in my head: 2 minutes in six miles means….no wait, I can’t do this math. If only Josh was here, he could have figured it out. Or at least shared the pain–he was probably halfway through Johnny’s by now! 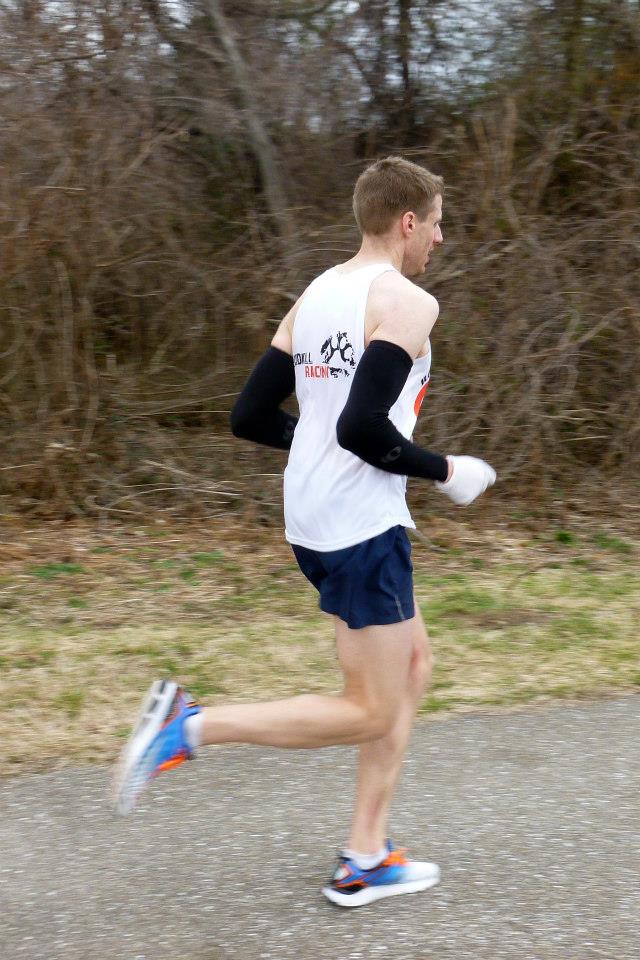 With one mile left, I finally understood that I was not about to completely fall apart. This realization was reassuring and propelled me to a 6:37 finishing mile. It was so nice to stop running, and I was very content with my time of 2:47:57 and 2nd place finish (results here). Karyn collected me and fed me water and pizza (she had finished the half marathon in a strong time–2nd in her age group–about an hour prior to my finish). 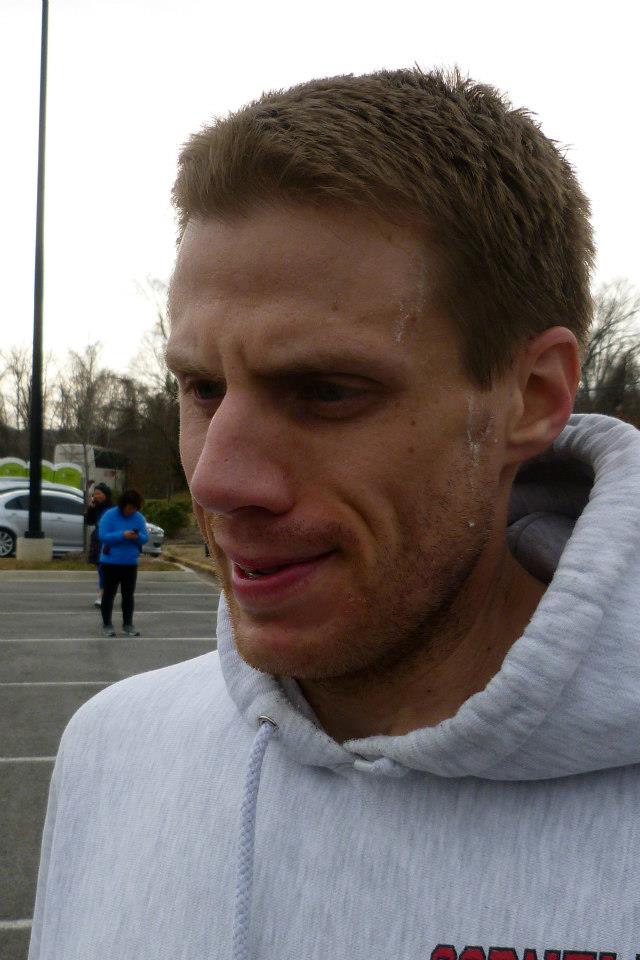 Looking ahead, I know that I am capable of running faster. Combined with better training, this experience will help me greatly. Possibly at the Boston Marathon next April, but I won’t fully commit to it just yet. It has been exciting to get back into shape after a disastrous 2012 summer. I’m ready to go for some shorter race PRs during the remainder of 2013! 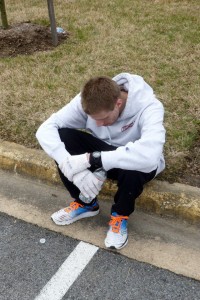 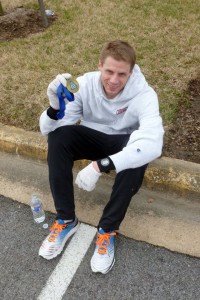