Last week was the Irondequoit 4th of July 10K.  This was a Rochester Runner of the Year Race, but not one of the more competitive ones.  While in past years the top time had been fairly good, the race wasn’t very deep, and I figured I could pick up some easy points.  It was a hot and muggy morning (like every morning in the last month) but at least I had plenty of time to adjust to running in those conditions after my recent visit to NC.  The course figured to be rather unpleasant.  It wound down to the lake over the first 5k then wound back up those same hills.  It is hard to enjoy a nice fast downhill when you are thinking the whole way about how you are going to have to come back up those hills in a few minutes. 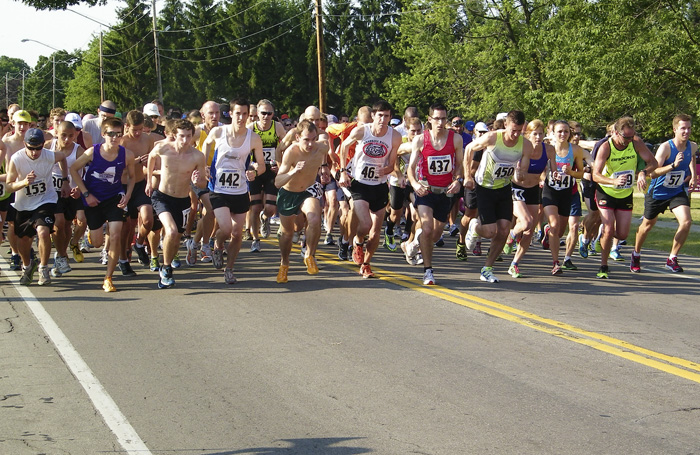 Bill Juda, who had won the race several times in the past few years, took off and by mile 1 had about a 30 second lead on me and the rest of the runners.  You can see in the video below how much of a gap he had opened up early on and you can see the size of the pack right behind me.  I had planned on running easy the first 5k then picking off people on the way back up the hills.  This didn’t happen, as no one except Bill went out with any kind of speed and despite running a modest 17:10 downhill 5k I was in second with a good 10 seconds on the guys behind me.

I remained in second place for most of the race.  Bill was long gone and most of the chase pack had fallen back, but 2 high school kids were hanging around behind me the entire climb back to the finish.  The last 800 meters of the race featured a very steep downhill a very steep uphill then a 200 meter flat stretch to the finish line.  About halfway through the steep downhill one of the high school kids blew past me.  I just couldn’t muster the leg turnover to keep up with him, and he managed to hold the small lead he opened up during the uphill and the flat finish.  As frustrating as it was to get run down by a 15-year-old kid, I was still happy with my 3rd place finish and with my time of 35:12. Full Race Results.

You will see in the posted results that I was given a finishing time of 34:48.  That would be great if it was true, but for the second time this year a timing company has screwed up the race results and credited runners with faster times than they actually ran.  The first time was at the flower city half when Yellow Jacket Racing messed up the times.  You can see from this thread on the Rochester Running message board https://www.robertstech.com/RRB/index.php?topic=1853.0 the owner of Yellow Jacket Racing (and also Fleetfeet) seemed to put some of the blame for this on me.  Apparently it was my fault for not telling them at the race that the times were messed up.  In the end they corrected the mistake and added about 25 seconds to everyone’s time.  This time I went right to the timing people and told them my watch had me about 20 seconds slower than the posted time.  They told me that they knew the finish clock was a little off but that the posted times were correct.  I told them I wasn’t talking about the finish clock, but about MY watch time verse their posted results.  I was then informed by one of the timers that I should be happy that my time was faster, at which point I just walked away in disgust.  To my knowledge only one other person complained about the timing being wrong and they were basically given the same answer as me, you can see the email reply here https://www.robertstech.com/RRB/index.php?topic=1883.0

You can damn well be sure if the timing company had added 20 seconds to everyone’s time a lot more people would be complaining.  I guess most people are just happy to take a faster time even though they didnt’ earn it.  I wonder how many people really believe they ran 20 second PR’s on a hot day on a hilly course?