McMullen Mile has been my favorite race of the year since moving to Rochester in 2008, and this year it became even more my favorite because the Perks family has a new miler. 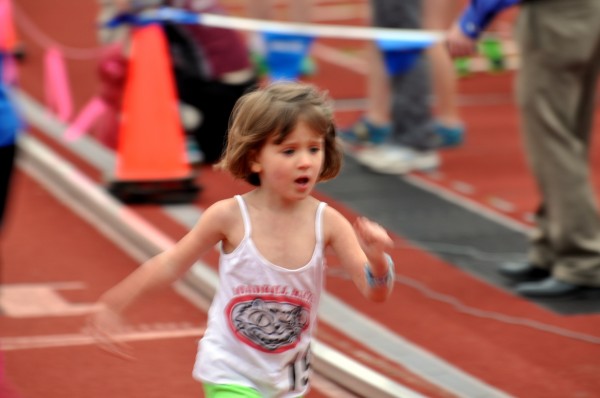 Most years after the McMullen Mile I give a long break down of my race. This year I’d rather talk about my family and friends who did the race, starting with my daughter Hazel. Hazel has done several races over the years, including 2 different mile races. Normally during the mile runs she takes lots of breaks and likes to look around a bit. The track however, really seemed to suit her, she didn’t stop once. As some of the other young kids bowed out after 2 or 3 laps she insisted on doing all 4. She may have finished last, but she was undeterred. She told her teachers on Monday “I didn’t win, but I’m getting faster.” Her tiny little legs managed to run each lap in under 3 minutes for a time of 11:49! 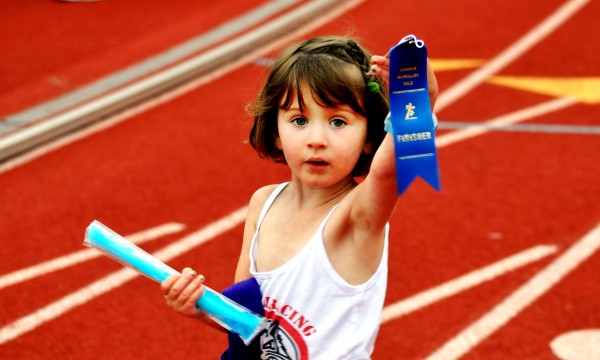 The next Roadkill Racer up was Drew in the men’s under 8 minute heat (actually there were several heats of this but Drew’s was the fastest under 8 heat.) 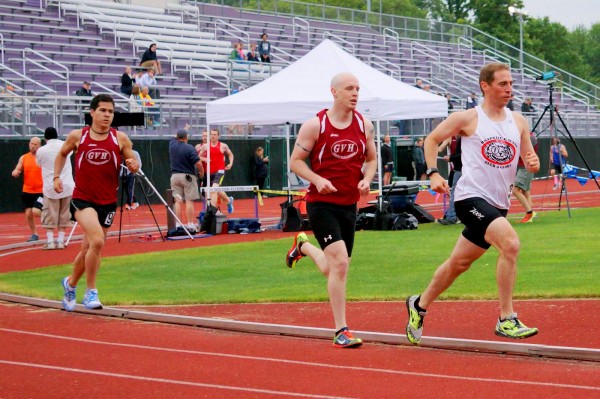 Drew ran a solid race with even pacing, showing his marathon running strength. He led for much of the race doing all the hard work before a few sand-baggers threw down a sub 70 second last lap. We are going to get Drew on the track for some rep work, and those guys will be in for a nasty surprise next year. I’m predicting we can take his 5:16 down to sub 5.

Erin M. and Lisa ran in the women’s sub-elite race. Before the race Lisa was writing out her goal splits and I thought she was being a bit too conservative. Luckily she figured that out for herself shortly into the race and took the early lead. 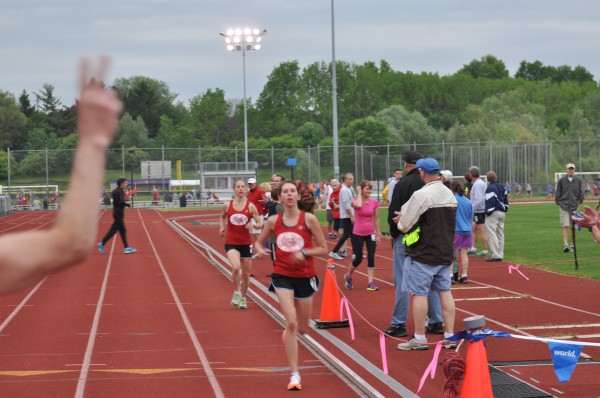 2 laps in, the Roadkill Ladies had blow their heat open taking a commanding lead. You can see them above hitting the half way mark with no one else on the straightaway.  They would hold their positions through the finish with Lisa running 6:16 and Erin 6:22. I fully expect both of them to be ready to move up to the elite women’s sub 6 field by next summer. 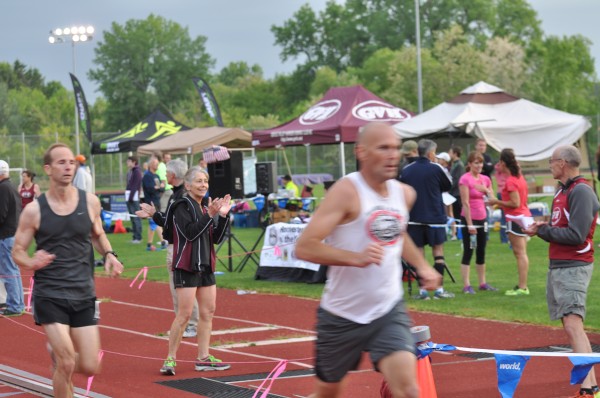 I don’t know why, but Joe always seems to end up with blurry race photos. He’s like Woody Allen in Deconstructing Harry. Blurriness aside, Joe ran a a great race in the Master’s Elite heat. I don’t know the last time Joe raced a mile, but he ran this one like an old pro, putting down a 5:24 good for 6th out of 18 elite masters.

The men’s elite heat was the last race of the night. Despite my constant pestering, year in and year out we once again only had 2 runners from Roadkill in the heat. This year I was joined by new member Mark Streb, who like me is a miler at heart (the big difference is he is a miler at legs too owning a 3:52 1500m PR). Mark showed his speed and closed with a 65 in the thick of 5 runners who finished between 4:22-4:27. 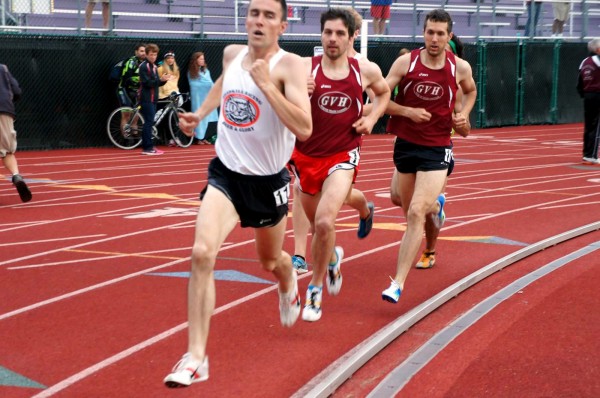 I’ve run the McMullen mile 6 times (every year I’ve lived in Rochester) and this was my worst finish to-date but not near my worst time. Not only was it my worst finish at McMullen, it was the only time I can remember finishing last in a race. I’d like to think that is a testament to how fast the field was this year and not an indictment of my 4:38. 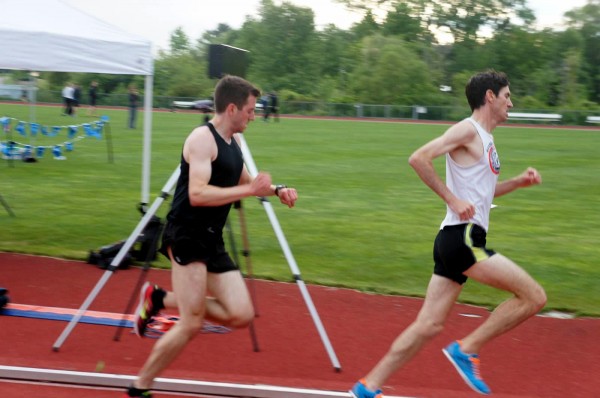 This is the last year I’ll be running the McMullen Mile Elite race. Next year I get to run against runners my own age in the masters race. I can’t wait to go up against some other old men and let these kids have their own fun. That of course means that some other Roadkill Racers are going to have to step up and run the elite race… I’m looking at you George-Dave-Rob-Kenny-Brett-Drew-et al.

And yes I did just call Matthew Roberts “George.” Now that we have another Matt on the team we have to join the rest of the world in calling him George.

And here is a bonus picture of Joe and Roo playing catch. 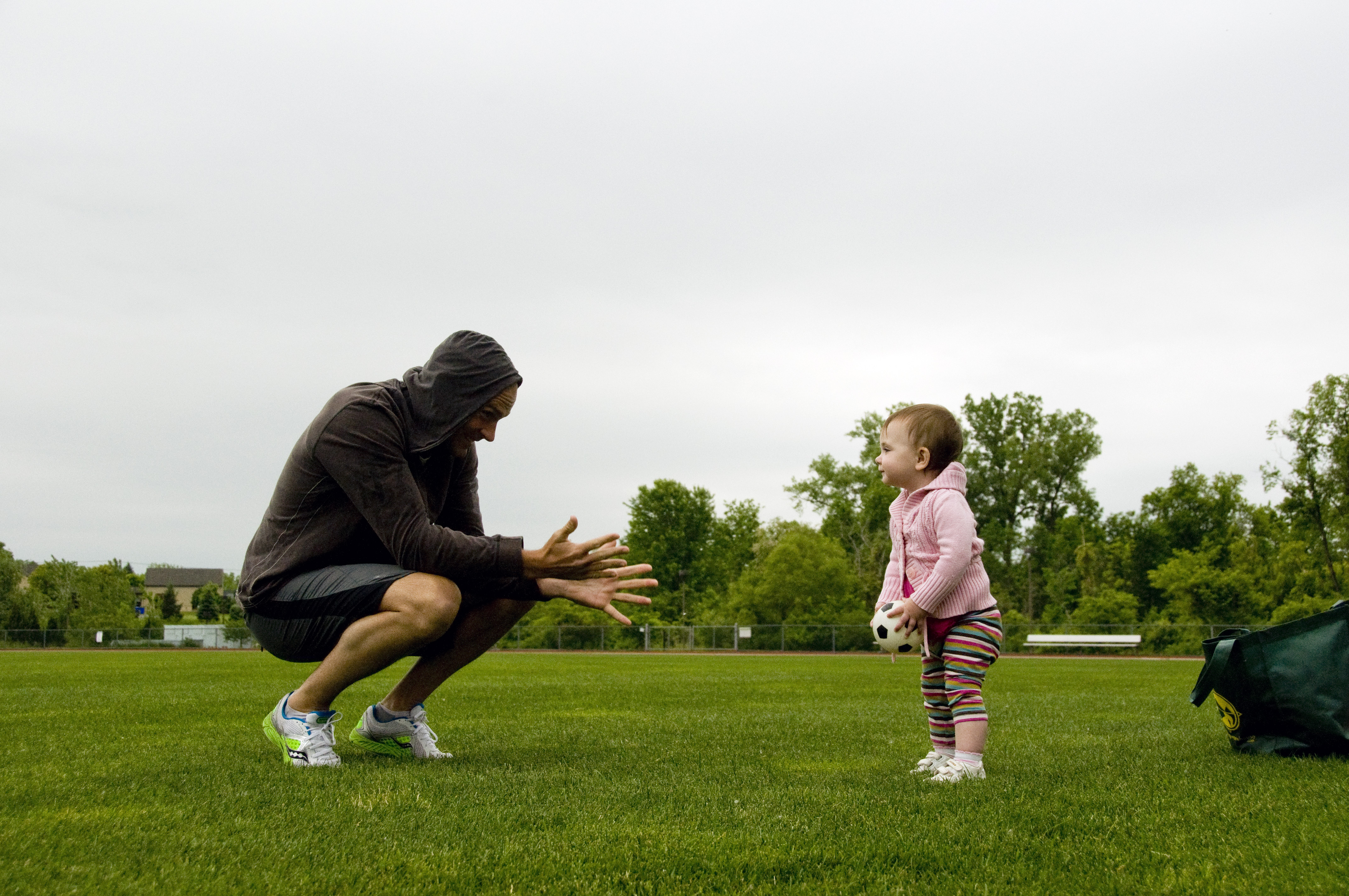