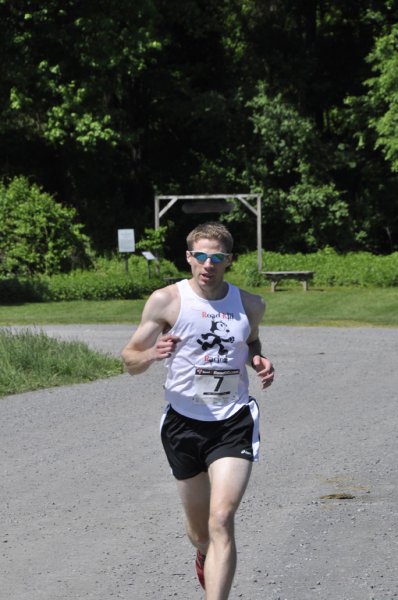 #83 Mike Insler takes first place and would have PR’d if he paid attention to the map.
Wally Waddle was a Wonderful Success

The 1st Annual Wa Wa Wally Waddle 5K was a wonderful success. Runners were greeted by a beautiful sunny spring day, and 28 of them got to go home with pie! Before getting into details about the race, and the pies, I have to thank all the members of the MHRRC who came out and volunteered on race day.

The Waddle was my first attempt at directing a race, and without the guidance and support of the club it would have been a disaster. In particular I want to thank MHRRC members Deborah Schwartz and Tom Storey for scoring the race, Pete Sanfilippo and Steve Perks for managing the finish line and club president Keith Axelrod for all his help and advice. I would like to extend a general thanks to the club for helping buy the t-shirts for the race and for the generous use of supplies and race equipment. Thank you James McCowan, the Vassar College Track/XC coach, and Vassar College for allowing us to use the property, and for donating your time to support our race.

Of course I can’t forget all the people who came out to run. It is you after all who really make these events possible. We had 74 finishers in the 5K and 8 finishers in the kid’s mile. Mike Insler, who I dragged down from Rochester with me, was the overall winner of the 5K. He finished the gently rolling course along the dirt roads of Vassar Farms in 16:34. Marisa Hanson was the first female finisher with a time of 18:42. Both times are course records which will never be broken as we are changing the course next year to both start and finish on the rugby field (this year the race started by Hooker Ave. and finished on the rugby field.)

Evan West followed up his win last week at the Miles of Hope half mile, with a win in the kid’s mile. He led the field of 8 finishers with a time of 7:29. 7 year old Raven Stanet took top honors for female finishers with a mile time of 10:05. For complete results and pictures of both the 5K and the 1 mile kids run you can visit www.mhrrc.org or the Wally Waddle site, www.friendsofsegowea.org.

Now onto the pies! Because this race was a fund raiser for YMCA Camp Wa Wa Segowea, I thought it would be fun to involve as many camp alumni as possible. Many alumni were nervous about running a 5K so we decided to put together a 10 person relay team. Each member of the alumni relay team ran a 500M leg, any runner completing the race before the relay team won a freshly baked pie. The alumni surprised themselves by completing the race in 20:30 resulting in 10 runners winning pies. We awarded pies to the next 8 female runners, in the name of gender equity and raffled off the remaining 10 pies.

We hope to see you back at Vassar Farms again next year for the 2nd annual Wa Wa Wally Waddle. Next years race will feature a new and improved route (no pot holes) and of course more PIES!

I would like to thank our current Wally Waddle Sponsors.