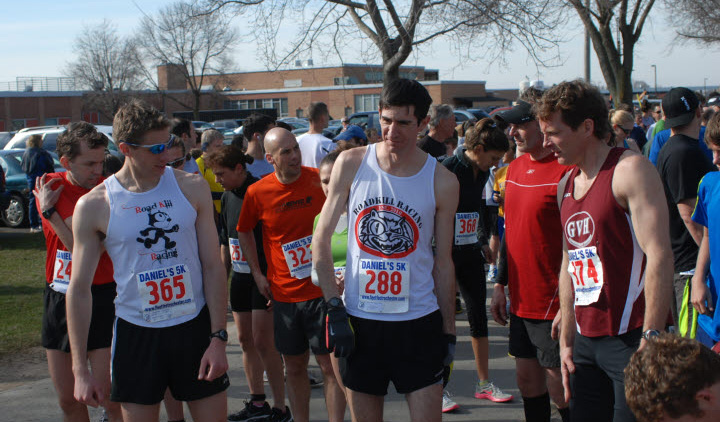 I have run enough races to know that winning has as much to do with who shows up as how fast you run.  With that said I’ve never won a race that I didn’t execute a good plan, and the 6th annual Daniel’s 5k in Churchville, NY was no exception.

This years race could not have been more different from when I won it back in 2009.  To start with, the weather this year was as good as it gets in early April.  50 Degrees sunshine and a light breeze.  The weather no doubt played a role in bringing out a record 300+ runners to the event.  In 2009 the race had about 150 runners.  The massive increase in runners did cause some problems for the timing team who didn’t code in enough chips for all the runners and then had to play catch up very close to race time.  Apparently there was also some sort of computer glitch that caused the letter L not to work, making adding new people like Bill Hall for instance very difficult.  Eventually they got everyone more or less straightened out and the race went off only a few minutes late.  This should serve as a great reminder for people to help out the race director and pre-register whenever possible!

There were a few GVH runners I knew at the race including club president Dave Bischoff and standout Trisha Byler, as well as a few others I know only by face and not name.  None of the local speedsters seemed to be in attendance so I was feeling pretty good about getting to the finish line first.  I figured my biggest competition would be fellow Roadkill Racer Mike Insler, who I planned to run at least the first 2 miles with.  After a nice warm up on the course and some strides on the track, it was time to head to the starting line. 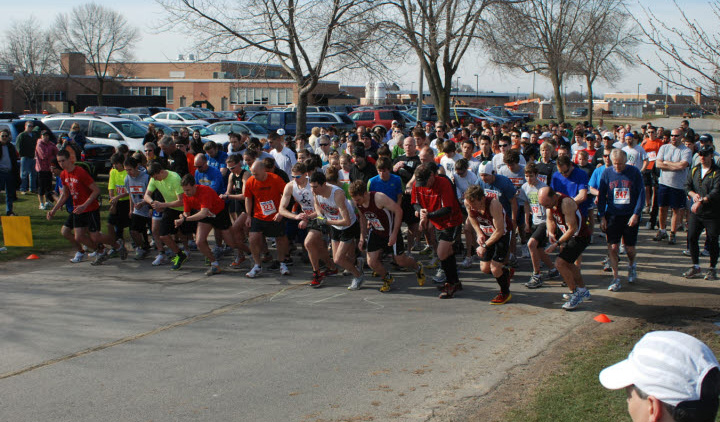 The record field was thanked and the race started.  I wanted to get out fast and see if Mike and I could open up a gap early on.  While we did get out fast, the course has a nice gradual downhill at the start so everyone got out to a fast start and after a 5:11 opening mile we had only put a few seconds on the rest of the field.  We began switching back and forth for the lead a little before the mile mark and continued this past the turn around and to the 2nd mile mark.  I thought we were running hard, and maybe we were but we weren’t running fast; we split the 2nd mile in 5:26.  Apparently Mike felt the same way I did because he muttered something to the effect of, “That isn’t right” as he looked down at his watch.  Up until this point I wouldn’t say that Mike and I were really racing each other.  We were just trying to stick with each other and run a good time, clearly that wasn’t working and with the shot of a PR out the window my thoughts turned to winning the race.  I felt if I could just stay within a few seconds of Mike until we hit the track for the final 400 meters I would have a good shot of winning.  Mike, knowing I’m sure what my plan was, made a strong push as soon as we hit the hill about 1000 meters from the finish which caught me a bit off guard.  I was hoping he would oblige me and run steady to the track where I could then out kick him.

We crested the hill and I made a push past Mike as we wound through the flat parking lot then down a little gravel path to the track.  At this point 2 time past Daniel’s champion Eric Boyce (who was there shooting video) road past on his bike and said “immortality can be yours.”  So the answer is yes… we runners do take our races a bit to seriously some times.  I could hear Mike crunching the gravel behind me just before we hit the track.  The finish was on the 55 meter mark so as we entered  just past the universal finish line we had a little more than 400 meters to run clockwise around the track for our finish.  As I ran past the finish line clock it read 15:24, with 400 meters exactly left in the race I knew a PR was long out out of the question, but I had no idea what Mike had left so I did my best to empty the tank.  An odd but helpful acoustic phenomenon tends to occur when I am finishing a race.  I always seem to hear the steps of rival runners coming up behind me spurring me to run faster and faster.  I had visions of my victory being snatched away in the final seconds. 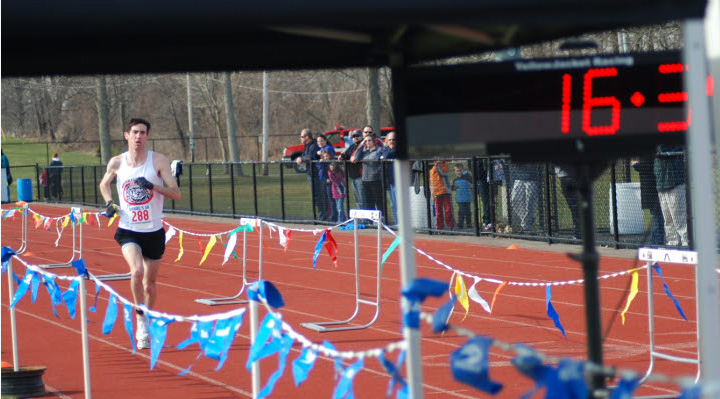 As a pleasant surprise, the race was giving out food gift certificates as prizes.  I won $10 at Subway, a Free 1 topping pizza, a Free Custard from Bill Gray’s, and a Free lunch at the Churchville Family Restaurant.