This was my first time running the Chase Corporate Challenge. First, I will start with the fact that this is a 3.5 mile race. This is very confusing for me. I have never heard of this distance being run, but it is apparently what they have been doing since the race’s beginning. Also, this fact is not the easiest to remember while running a race.

The week leading up to this race was very exciting for me. I finally felt like I was starting to get back into shape. I was definitely looking forward to the race after managing a [email protected]:40 workout. Then the 14mile long run with Mike on Saturday did seem much harder than usually, but by the time Tuesday came around I was feeling pretty good. Lately I haven’t been too thrilled with my races or workouts. I don’t really know how to explain it, but this race I felt ready for. I felt that this would indicate the start of me going after my 5k PR.

The weather in the afternoon was very nice. There was a little bit of wind and the sun was out. Shortly after arriving at the race Mike handed me one of the University of Rochester cross country jerseys that he managed to retrieve. While I do think the RKR jersey has the best logo I have seen, Mike and I decided that it would probably be better to wear UR jerseys because we were on the UR team after all. Then we headed down to the tent area, which I will refer to as “the mud pit” due to the week of rain leaving the ground very wet, and we meet Ryan. Ryan would not be running the race today due to an injury that he is coming off of, but it sounds like his training is about to pick up again which is good news.

Navigating the mud pit without getting the socks wet proved to be impossible. Mike’s girlfriend Karyn decided to switch to sandals and eventually barefoot turned out to be the best option. Luckily I brought extra socks, and lucky for Mike that for some reason while packing I decided to bring two extra pairs.

When we got to the start I was definitely surprised by the number of people, the official number being 8,962 people. I rarely run in races this large, so it was very interesting to see. Before the start Mike spotted Matt. Matt was just starting to run again after taking an easy week following his trail marathon (see “Two race reports for the price of one!” for Matt’s story). He told us that he would be taking it relatively easy. Mike and I wished him luck and found a spot at the front. We were then spotted by Jeff Bigham (I think the jerseys gave us away), one of the other UR team members. He said that he was aiming for 5:20-5:30 pace which was perfect for me, that gave me someone to look for.

Once the gun went off a member of the Corning team took off. He took a commanding lead right out of the gate. Most guys that I see do this crash after the first mile. Surprisingly, this guy did do pretty well, he didn’t win, but he still ran a very good time. Other than this one guy I would say the start went well. Mike crossed the first mile in 5:10 and I followed a few places behind at 5:20. This seemed like a perfect start to the race. 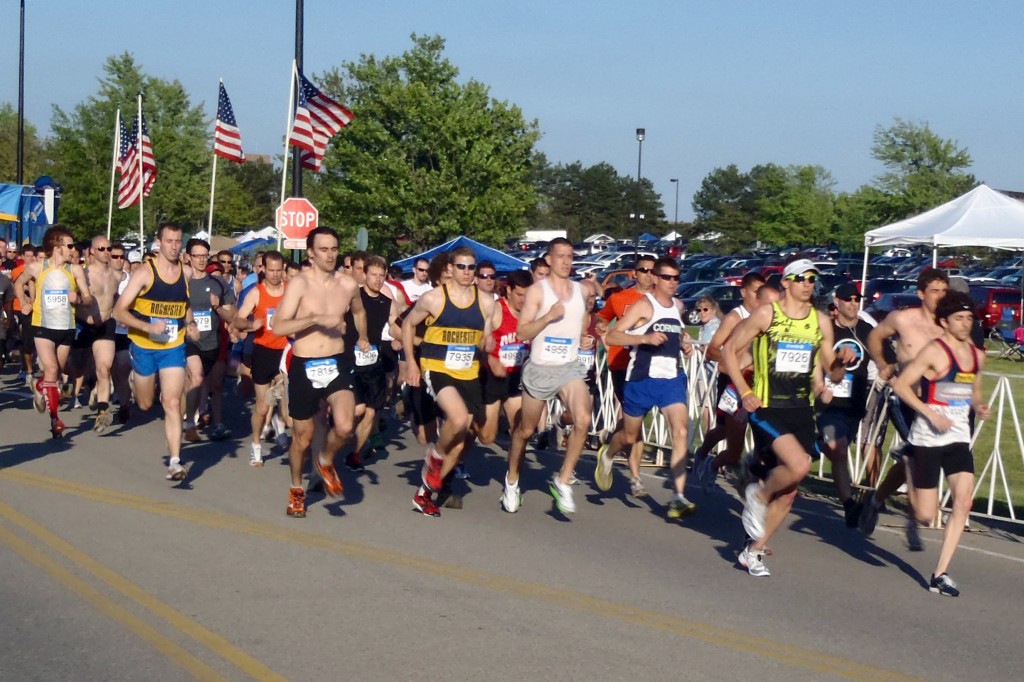 After the first mile, the field really started to spread out. I managed to pass a small group then I started to settle into my pace. I should have tried going after the next guy, but I was just in one of those pockets where there is no one pushing me from behind and the guy up ahead seemed too far away.  Then I heard someone say something like “good job Chanse” from behind. I was disappointed that someone had caught me and I wasn’t able to tell who it was. Then to my surprise, Matt pulls up beside me. I asked him what the hell he was doing here because he was supposed to be running “slow” (in fewer words of course). He was apparently feeling pretty good and we crossed the two mile mark at 11 minutes. A bad second split, but I could tell that Matt and I were picking up the pace.

Matt and I managed to catch a couple of people who I wasn’t even considering catching after the first 1.5 miles. Around the 3 mile mark I started to lose Matt. Now this is where the 3.5 miles becomes important. I realized that a 3.5 mile race is run the same as a 5k race, but that small difference is very important. I reached the first corner after the 3 mile mark and I started to really pick up the pace. I was ready to sprint coming off of the corner. This is because in a 5k the finish would be right around that corner. To my disappointment, there was no finish line after the corner. Although demoralized, I only let up a little bit, but Matt still catches me.  While I was happy that he was up there with me, I was not looking forward to a kick. After entering the final stretch I managed to pick it up a notch and crossed the line just before Matt. I was very happy that Matt was feeling good today because he definitely prevented me from settling into an easier pace. 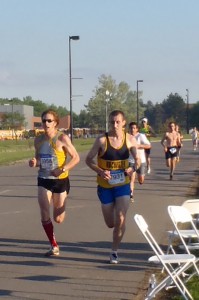 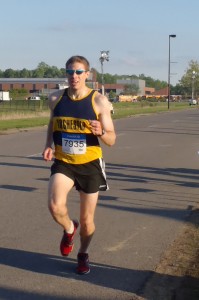 Overall, I would say it was a good day for RKR. I finished in 19:26 and Matt was at 19:28. Mike did seem a little disappointed and felt that he should have gone after the guy in front of him. He still ran a very good time of 19:02. The race went very well for the University of Rochester. Jeff Bigham crossed at 19:34 and Mike Hoffman (we didn’t know he was on the UR team until the finish) ran a 19:38. I won’t list off all of UR times because we did have 318 people on our team. Mike and I were part of the mixed team and we took first in our category.