The Flower City Half Marathon was this last weekend and it was a big race for RKR. We had a large showing. Josh, Rob, and I were all aiming for the 1:15:00 mark. Blake was prepping for the Buffalo marathon. A new member, Brett would also be aiming for around 1:15:00. Also, Kenny, who I have been working on recruiting, would be in the mix with those of us aiming for around 1:15:00.
When I arrived at the race I had an issue that I wanted correct. Ryan sustained an injury after registering for the race and would be unable to run. Due to us not wanting to waste a perfectly good race number (you know, conservation and stuff), I would be running the race as Ryan Burke. The only issue was that Ryan was entered as being 52 years old. This may have caused some problems with age group awards and I didn’t want to do that. Luckily I found a nice person with a laptop that quickly corrected the problem. So after that, I was ready to focus on the race.
I met Josh and Rob before the start for a warmup. We all commented on the weather. Even though at the start the temperature was only 35 degrees, it was still pretty nice out. The sun was out and there wasn’t much wind. The weather really was almost perfect for running a half marathon. After the warmup Josh, Rob and I dropped off our extra gear with Lisa (thanks Lisa!) and headed off to the start. 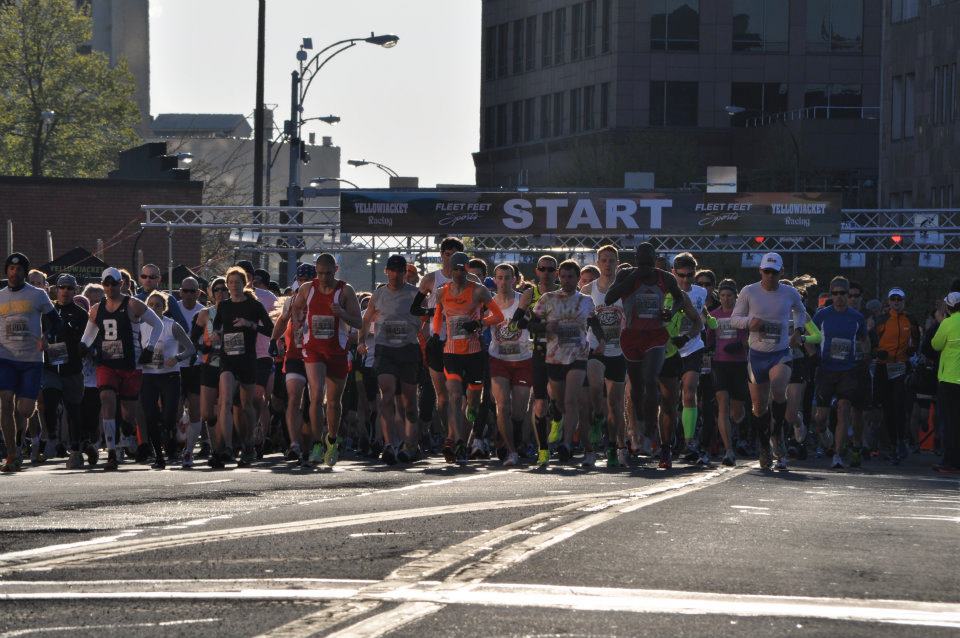 Mile 1: For the start of the race I planned on staying between Josh and Rob. Josh told me that he would be aiming for a 5:45ish to start the race and I thought Rob may go out at anywhere between 5:20 and 5:40. After about 200m I noticed someone that I recognized. So I decided to run up a few places and see who it was. It was Kenny. We are both grad students in the same department at the University of Rochester and I have just recently found out that he is a runner. Rob and I ran with Kenny for the first mile, which turned out to be a 5:33, and then Kenny pulled away.

[youtube]https://www.youtube.com/watch?v=2cQdDFiJJcU&hd=1[/youtube]
Miles 2-5: The next three mile Rob and I worked together and held a strong pace (not very even, but strong). Between mile 5 and 6 Rob started to fall back. I was hoping that he would keep pace with me because the next group was a ways off and I didn’t want to run this race on my own.
Mile 6-8: This is when the hills started and this is when I started to feel really good about my race. After the first hill going into Highland Park, I closed a significant amount of distance on the next two guys in front of me. I didn’t realize it at the time, but one of those people was Brett, a new RKR member. I managed overtake the two and I was leading our small group when we entered the cemetery.
Miles 9-11: The hills were tough, but I was feeling strong. I was being chased and I was closing on Kenny. So I decided that this may be a good time to make a move. Brett started to fall off sometime through mile 9, but the other guy stuck with me. We cruised through mile 9 in the cemetery and we were closing on Kenny fast. Once I checked my watch I figured out why, we just ran a 5:28 (there was a lot of downhill in this part, but still, we were moving). That would be my fastest mile in the race. I then managed to pass Kenny, but the other guy was still sticking with me. Of the two of us, I was leading and the only thought in my mind was that I had to break this guy. I kept telling myself that if I continued at this effort then he would drop off by the time I hit the 10 mile mark. Well, I was wrong. So I allowed myself one bad call and decided to readjust my thinking. All I had to do was continue to the 11 mile mark, he would surely drop off by then… wrong again.
Miles 12-Finish: Unfortunately I was finally overtaken by the guy I was trying to break shortly after mile 12. I don’t think that I slowed down because I was still averaging 5:40’s, I am just pretty sure he sped up. At this point, my thoughts have shifted from “break this guy” to “oh my god I want to be done.” I was unsure if I would be able to maintain my pace till the finish. I felt like I may have ran to hard earlier and I was about to crash. Somehow I managed to keep going. I ran mile 12 in 5:45 then I managed to run mile 13 in 5:39 (I think I sped up a bit because I was thinking about the last mile like a last interval, the last one never counts).
This was my first half marathon and I would have to say that it went better than expected. I was aiming for somewhere around 1:15:00 and I ended up breaking the mark by 30 seconds. My legs have been very sore for two days now, and I cringe whenever I encounter any number of stairs, but it was worth it. My official time ended up being 1:14:30. My time was initially listed as 1:14:05, but do to a timing error everyone’s time was off by 25 seconds.
I wasn’t the only one with a great performance though. There were a lot of new PR’s for RKR. Brett Smith was next with a 1:15:22, closely followed by Kenny Goodfellow with a 1:15:32. Next was Rob Castor who ran a 1:15:41 and then Josh Perks with a 1:16:27. Blake Landry ran a PR with a time of 1:53:45. For the most part it sounded like everyone had a pretty good day. Rob had a problem with a blister, but still managed a PR. Josh said that he really wasn’t feeling too bad, but he just felt like he couldn’t run any faster. So his PR from last year of 1:15:51 still stands.
Matt, who has been training for 5k’s, was a volunteer at the half. I believe that he set a new PR for the number of medals handed out in one day. This is just a guess though because I do not know his previous PR and I have not heard the official count for the exact number of medals handed out. He also mentioned that he will be switching to only handing out medals at races. This is probably for the best because I assume that Josh was going to kick him out of RKR anyways after Matt decided that he was not going to be the one to give Josh his medal.


Congrats to everyone who ran and thanks to those who were cheering. Seeing so many people out there supporting the runners was awesome and the occasional cheer for RKR was appreciated.