A strange phenomena often occurs in my racing.  When I run a personal record, it has seemed almost too easy.  Sunday at the Flower City Half Marathon was no exception.  Let me back up to 2 months ago, when I wasn’t even sure if I was going to run this race.  At the beginning of March we were still dragging our way through the long Rochester winter, and while I had been feeling good about my workouts I didn’t feel like I had the mileage base to race a half marathon.  I spent the whole month going back and forth until finally sending in my application for the half at the end of March.  It turns out it was a good choice.  Despite the fact I averaged just 40-50 mpw over the last few weeks (my log) I believe the quality of my workouts made up for the lack of quantity.

Race day started early at the Perks’ house, with Hazel waking up with me at 5:00 a.m.  Apparently she want to see both the start and finish of the race not just the finish as was the original plan.  I left the house at 6 a.m. after eating half a cream cheese bagel, 4 bites of yogurtand drinking half a cup of tea.  I arrived with more than hour to kill before the start of the race and had a chance to talk with a few of the other runners I knew would be up front in the race, namely Dave Rappleyea who was hoping to finish in the money after his solid performance at the Spring Forward 15k.  I ran into Matt Roberts, the newest RKR member in the parking lot, and gave him Mike Insler’s racing singlet because we haven’t had a chance to get him his own.  We did a light warmup about 30 minutes before the start of the race and then headed up to the bridge to start the race.

The race started with a quick down hill off the Broad Street Bridge and before we even got 400 meters into the race a lead pack of 6 runners had already opened up a sizeable gap.  The lead pack included Rochester regulars: Mark Andrews, Jeff Beck, Dave Rappleyea, Dave Bradshaw, and 2 out of towners I didn’t know Todd Meyer and Steven Ryan.  You can see the start in this video.  The lead runners appear again about 2 miles into the race 2 minutes and 50 seconds into the video.

Early in the race I was trying my best to stay relaxed and to keep the pace even and under control.  Keeping the pace even wasn’t working well as I ran 5:52, 5:28, 6:11, 5:34 but the effort was very steady, it was just the rolling nature of the course that was throwing the pace all over.  Although we didn’t discuss it before hand, a little before 3 miles into the race Matt came up along side me and I told him he could tuck in behind for a bit me as the next 4 miles were going to be into a slight but steady head wind.  We took turns drafting off eachother as we cruised down East Avenue and Park.  We passed Mike who was waiting at the 5 mile mark in 28:51 5:46 pace.  Things were going great so far, but we were about to hit the Highland Park section of the race.  As the name implies it was about to get hilly.  A little past 10k the hills started in earnest and for the first time it began to feel like work. 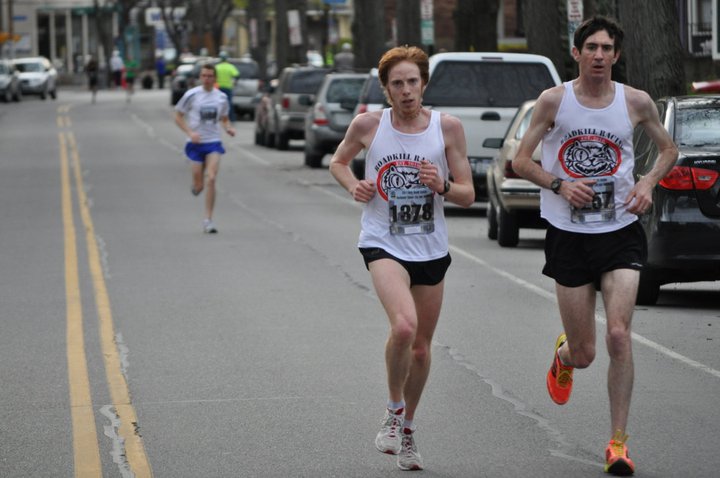 My hope was to stay under 6 minute pace miles 7 and 8, so as soon as I got to the first long hill I turned up the effort and I could feel Matt sliding back.  Mile 7 marked the top of the first big hill in the park and I was greeted by a large group of drummers and a 6:01 split… close enough I thought.  After a brief down hill rest the race turned into Mount Hope Cemetery.  Coach Rief of GVH was at the entrance and told me I had a decent lead on the next runner.  I knew it was Matt behind me so I tried to explain I wasn’t worried about him because he was on my team.  I’m honestly not really sure what I said though, hopefully nothing rude.  The race wound around through the cemeteryfor about 2.5 miles and as we snaked our way along I noticed I was begining to close on one of the runners who went out with the lead pack.  That, combined, with splitting mile 8 in 5:59 gave me a huge mental boost.  I was now clear of all the signifigant hills and my only thought was I felt great and it was now a 5 mile down hill race.  Each time the 6th place runner glance over his shoulder I pushed harder.  I passed him just as we exited the cemetery at mile 10.  It was great to see Ryan Pauling at the 10 mile marker offering encouragement.

I came through mile 10 in a time of 58:09 and I thought for the first time I could break 1:16:00.  Up to that point I my thoughts had just been on running a smart race and getting to the top of the hills with something left in my legs.  I was spured on to a 5:43 next mile, and this ridiculous grin as I ran past Chanse at the 11 mile mark.

Matt Roberts also had a great race.  He ran a huge PR and finished in 8th place with a time of 1:16:43.  Now we just need to get him his own singlet.

I shattered my old pr of 1:18:52 by over 3 minutes.  I didn’t stagger to the finish line like I had done in all my past half marathons.  I think I need to send my Dr. a big thank you gift for helping me with my asthma.

I also need to thank all the people who were out on the course cheering on me and the other runners.  The course brought us through many of the great neighborhoods and parks in Rochester and fan support was incredible all 13.1 miles of the race.