The Hospice 5k is another hot Rochester road race.  It might not have the depth of Bergen, but it is still stacked in the top 7 places.  This year 2:13 marathoner Jeff Eggleston was leading the field of elite/semi-elite runners.  It is funny to think that in my home town of Poughkeepsie, NY I would win 90% of the 5k’s and here in Rochester I’m lucky if I crack the top 5 in most races and some races I can’t even crack the top 10.

It was a nice enough morning for a run; overcast, 45 degrees, 15-20 mph winds.  OK the 20 mph winds were not very nice.  The race as expected got off to a fast start, and with the tailwind the first mile in 5:07 seemed effortless.  I was pulled along by the lead pack for about the first 400 meters until 10 runners seperated leaving Chanse, Dave Bradshaw, and I in no mans land.  I knew the tailwind was helping but I was not ready for what the headwind was going to feel like after we turned around.

I was a bit disappointed but not surprised to split the 2 mile in 10:32.  Dave and Chanse had opened a decent gap during mile 2 but I thought I still had a chance to run them down in the last mile.  I felt like I was hammering along but I wasn’t making up any ground on Chanse.  I assumed both of us had really picked up the pace and was expecting to hit mile 3 having just run a 5:10-5:15.  It was not to be, I had just run another 5:25. 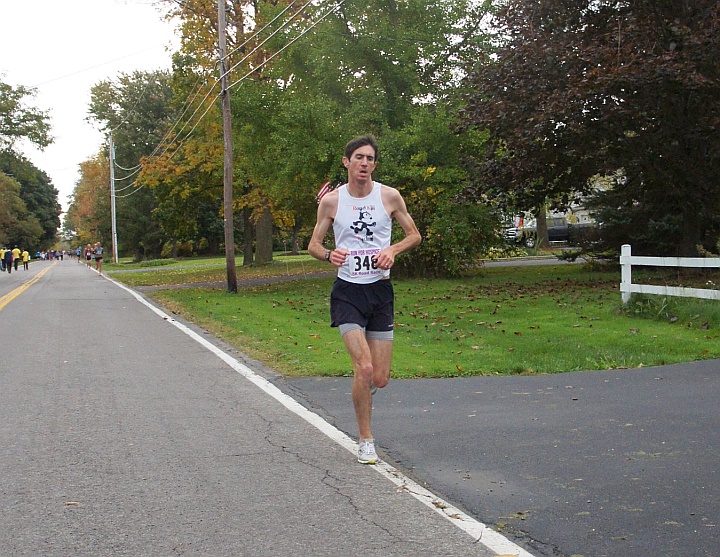 With .1 miles to go I put on my best kick and closed a 10 second gap with Chanse to about 4 seconds for a final time of 16:31 and a 12th place finish.  I was not passed nor did I pass anyone in the last 2.5 miles of race.  For the most part there wasn’t even anyone 10 seconds ahead or behind me, which made for very lonely running.  I’m looking forward to our next xc race on October 22, as there are usually people to pass or to fight off.