The Medved Cure for ALS 5k was this last weekend and I was looking forward to this race. I had been feeling very well the two weeks prior to this race and felt that I had a really good shot at finally being in the 16’s again after about 1.5 years. My workouts haven’t been very fast lately because I have been focusing on just increasing my mileage, but I was feeling strong.

The race started just outside Frontier Field and then just loops out around downtown and finishes inside of Frontier Field.  I was told that the course was changed a bit from last year; apparently the number of turns was reduced. The course looked like it could be fast, there was only 19 feet of elevation change between the highest and lowest point. Also, there was a good turnout of almost 700 people.

The first mile was surprisingly easy. Before the race I spoke with Josh Harter and he said that he was aiming for around 17. So I stayed with him for the first mile. I thought that I may have been going a little fast because Mike was not that far ahead of us. We went through at about 5:24 and I believe Mike was around 5:20.

The 1 mile mark was a turning point for me during this race. At the Chase Corporate Challenge I went out at a 5:20 then slowed to a 5:40. The only reason I managed a good time is because Matt caught me and pulled me along. So during this race I made an effort to speed up. I was sad that Josh Harter did not go with me because this meant that I was going to have to try for under 17 on my own. Speeding up after the first mile is hard work. I thought I managed to actual do it, but I really only held pace. This did help me pass two people in the second mile and for a short while I was actually starting to catch Mike. He must have just lost his pace for a bit because he quickly recovered and started pulling away again. 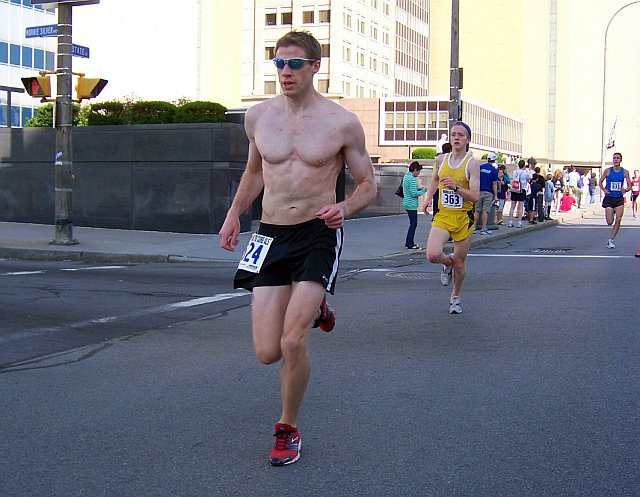 There was no one at the 2 mile mark to call out splits, which didn’t help because I was aiming for even splits. There was one runner that looked like he could be in my reach so I just decided to try and chase him down. I reeled him in for the entire third mile and I managed to catch him just before entering the field. I made sure to pass him with a short burst of speed to try and discourage him from staying with me. This is just because I am lazy and I really didn’t want to fight him off at the end. I continued to gap him as I rounded the field. Then after all this work to secure my place I turned the final corner and saw the clock at 16:43. This ruined my plan to not sprint at the end, but it was a very good thing that I did. I crossed the line at 16:59 and took 6th overall. While I did not break my goal by much, I can finally say that I am back in the 16’s. 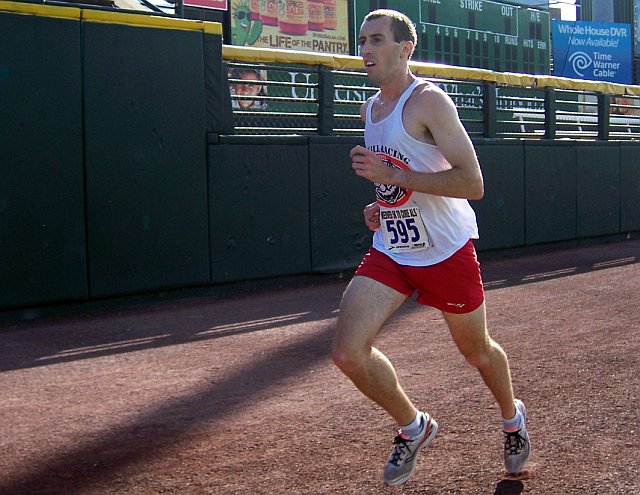 After the race I talked with Mike who finished 5th with a time of 16:38. He was a little disappointed with this time, especially after running a 4:30 mile recently. I am guessing that he is just coming down off of his peak from training for the mile and he will probably start dropping his 5k time again soon. Mike and I both received a $15 gift certificate to Medved for being 1st place in our age groups (although, the two who won the race were in my age group, they were removed for being the overall winners).I was very happy with this race and am excited to see how the rest of the year goes. 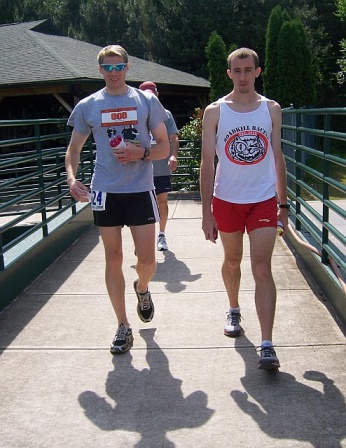