I always enjoy “going home” to race.  While I have almost spent more time not living in Dutchess County as I have living there, I will always think of returning there as going home.  This past weekend I had the chance to run in one of many great new races being put on by the Mid-Hudson Road Runners Club.  The Treetops to Rooftops 5k had it’s 3rd running on Saturday and more than 400 people turned out to run this great race.  The race starts on the Highland side of the Hudson River (the westside) runs to the Poughkeepsie side and then returns to the Highland side. 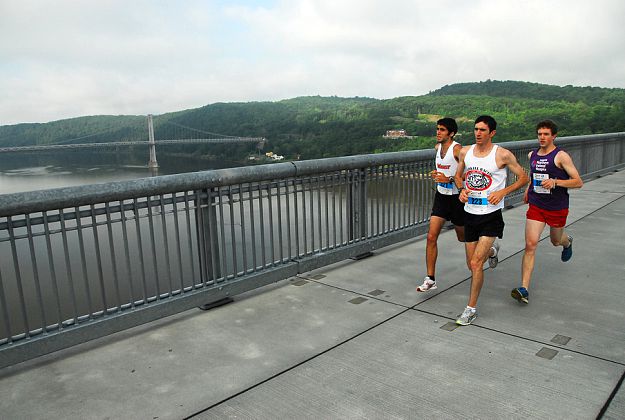 The race starts on a short hill before running on to the walkway trail and 4 of us seperated early from the pack.  The 3 of us pictured above are Billy Hild, me, and James Boeding.  Both Billy and James are college freshman and half my age.  Just out of the shot is Mike Chow who is in my age group.  We came through the mile in 5:20, which I suspect was not correct as we were moving pretty fast and most of the first mile was down hill.  We stayed in a pack until just before the run around when James made a strong move and opened up a 15 second gap in about 2 minutes.  Billy, Mike and I contiuned to run as a pack and I could tell we were not in any danger of catching James.  I was feeling pretty flat since the start of the race, and once I let James open up a lead I mentally fell apart and started thinking about 2nd place instead of first. 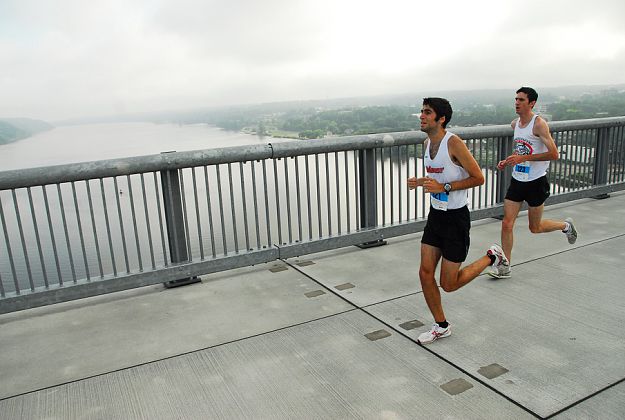 The picture above shows Billy and I about 800 meters from the finish.  All I was interested in at this point was staying with in a few seconds of Billy then kicking for second place.  After the race Mike asked me what I was doing during the last half.  He said I looked like I was just jogging along behind Billy, and that is exactly how I felt, although usually when you are jogging you feel as if you could speed up if you had to.  When we hit the 3 mile mark I broke into a full sprint expecting a lean to win it at the finish but that didn’t happen.  I ended up finishing in 2nd place 18 seconds behind the winner and 4 seconds in front of 3rd. 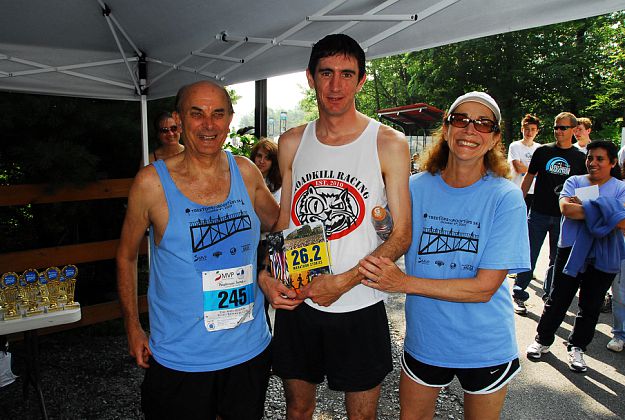 In addition to winning an age group trophy I also recieved a signed copy of 26.2 Marathon Stories by Kathrine Switzer and Roger Robinson who ran in the race.