Sunday was the first indoor track meet of the series, and Mike and I entered the 3000 meter race.  We were joined at the meet by Ryan who wasn’t racing but served as coach and photographer.  Last year I ran the 3000 at the first meet of the series with a time of 9:35 (5:08 pace) this year  was shooting for sub 9:20 (5:00 pace).  Mike had the same goal and we planned to run as close to even splits as possible.  If we could it 37 second laps we would be in good shape to hit our goal. 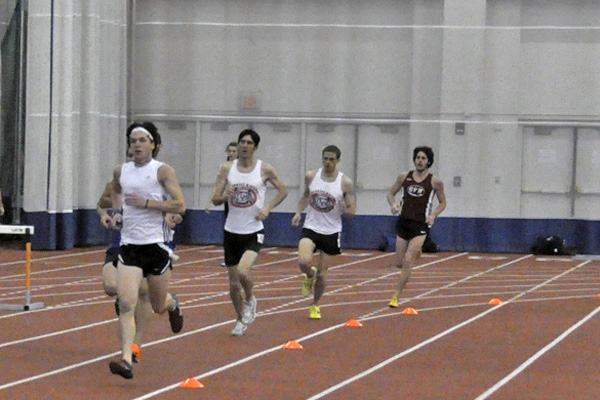 There were 14 people in our heat (the “fast” heat) as not unexpectedly a few of the younger guys jumped out to fast start, but I tried to stay relaxed and ran a 37 second first lap which had me running in 4th place.  Mike was 1 GVH runner behind me at that point but we were in a tight pack so it didn’t really matter.  The next 600 meters flew by right on pace, the 3 runners now ahead of me had opened up a 5-6 second gap so at 800 meters I made a move to try and close the gap but after a hard 150 meters didn’t put me up with them a settled back in to a more steady pace. 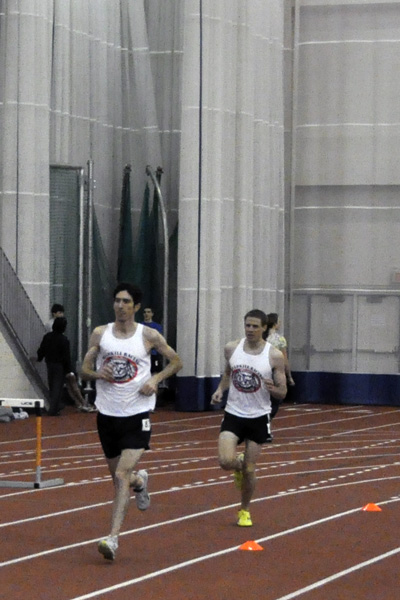 At that point Mike passed the GVH runner who he had been running behind and moved up on my shoulder.  I was looking forward to him going by me so he could pull me along for a few laps, but he quickly settled back in behind me.

By 1600 meters I was still feeling pretty good.  I was glad to have just 7 laps left and was right on pace with a 4:56 (4:58 mile pace).  By 2000 meters the pain was really starting to settle in.  With 1000 meters to go I had to run a 3:10 or better to hit my goal.  I was starting to seriously doubt I could hold the pace and dangerous thoughts like “whatever happens you will run a PR” starting going through my head.  Lucky at about that same time Ryan starting shouting that the lead pack was coming back to us.  Sure enough, 2 of the 3 people ahead of me were starting to flag and with 800 to go I begain my final push to the finish.  The grueling 6×800 meter workout Mike and I had done a few weeks ago at U of R gave me the confidence I needed to start hammering with 4 laps to go.

Mike told me after the race that he had been planning on making a move on me at 800 meters to try and steal my finishing kick, and it might have worked if I hadn’t decided to make the same move on the leaders. 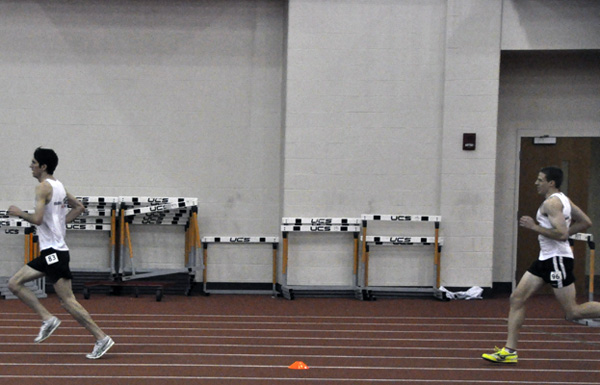 With 400 meters to go  Mike and I passed 2 of the 3 leaders with out much resistance.  They just let us by without any fight, which was good because at that point I was running as hard as I could already. 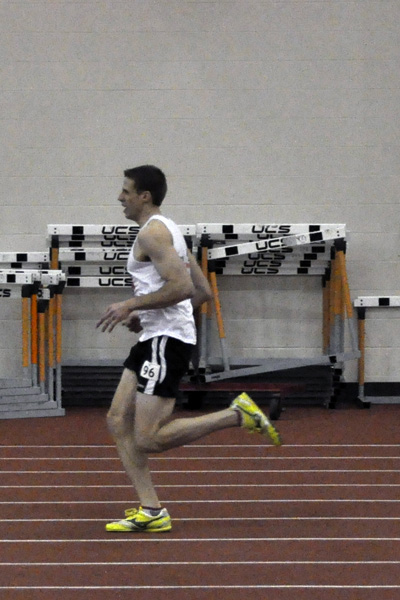 During the bell lap I did everything I could to try and catch the leader.  Despite running a 33-34 second final lap I just couldn’t reel him in. 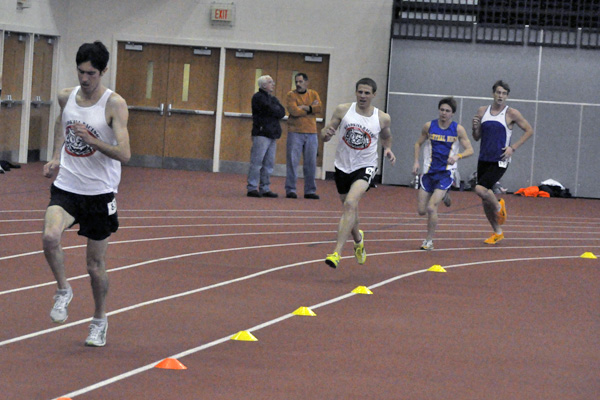 I was able however, to run a 20 second PR and finished with a 9:15.09.  Mike also ran a massive PR and finished with a time of 9:17.90,  I’m not sure what his old 3000 meter PR was but I’m pretty sure it was at least 30 seconds slower than he ran Sunday.  It was a great start to the indoor season for both Mike and I.  My next race is the 1 mile on January 16th.  Mike may or may not be running the 5000m at the Upstate Holiday Classic on Thursday Decemeber 30th.  As always the River Road Running Club did a great job with the meet, getting all the races to go off smoothly and updating the results quickly.  Full meet results here.