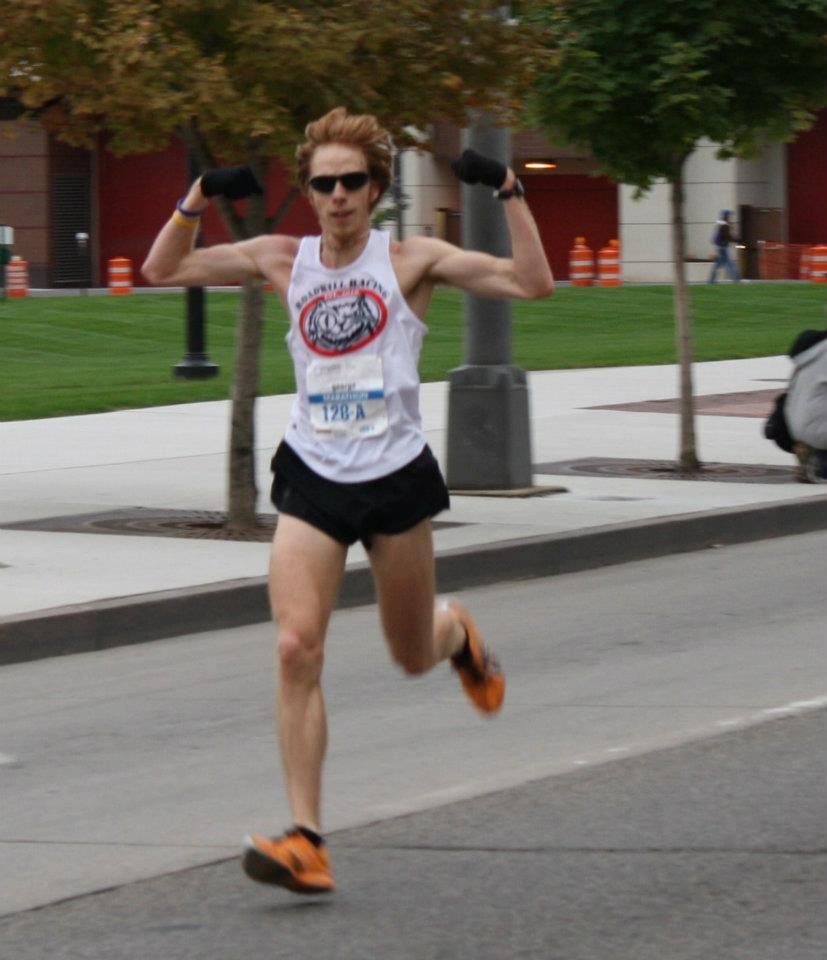 On October 16th, I put all of the months of training, the hundreds and thousands of mile of running, the countless hours pounding the roads and the trails since May, to the test.  While I have been running the Pete Glavin Cross Country races, and some other road races as well, the Columbus Marathon was the Big Race for me this year.  In 2009, I ran 2:48:15 at the Marine Corps Marathon, and after subsequently dropping my 5K PR to 16:24, I knew that a sub-2:40:00 marathon was within the realm of my abilities.

I averaged somewhere around 90 miles per week in the months leading up to this race, and was in the best shape of my life, without any doubt.  I actually had some doubt and felt a little discouraged halfway into the training cycle because I was feeling tired and sluggish all the time and not hitting the paces I felt I should be.  I had been doing doubles nearly every day up until this point and doing a long run and two workouts a week, and I made a decision to try to run mostly singles and only have one long run and one hard workout a week in the future.  That seemed to work, and immediately I dropped from struggling to hit 5:50 for tempo runs to running 5:40 easy, and having to slow myself down to stay above 6:00 during marathon pace runs.

I always have a three-tiered goal going into a marathon, so my goals for Columbus were 1) PR, 2) under 2:45 and 3) under 2:40.  The first goal is what I need to do in order to consider the race anything but a failure.  The second goal is what I would consider a good race, and the third goal is always what an absolutely perfect race would result in.

My wife, my friend Dave Rappleyea and I made the drive out to Columbus on Friday so our legs could recover on Saturday.  It was extremely windy on both Friday and Saturday, which was giving me considerable anxiety.  I didn’t want to have spent the last five months busting my butt just to run a slow time due to the wind.  Luckily, the wind died down almost completely by Sunday, and race day morning was as perfect as a marathoner could ask for: just under 50 degrees, overcast, and with just a hint of a breeze.

Dave was lucky enough to get into the elite corral at this race, so after we warmed up for 10 minutes together, he left me to join his disgustingly fast compatriots in a nice, heated building with actual bathrooms, while I and the rest of the plebes were forced to wait in bladder-achingly long lines for cold, dirty porta-potties.  Actually, it wasn’t that bad.  I was not, however, able to make it to the gear truck after getting out of the porta-potty before the gun went off, so I stashed my sweat pants and beloved Boston Marathon jacket between some flower pots in front a bank and hoped I could find them after I finished.

I maneuvered my way to the front of the A corral where I was herded and nervously waited for the gun.  I tried to focus and prepare myself for the coming hours by reflecting on all my training and how great I felt during my workouts (except for the last few, because tapering always messes me up).  I visualized the race and finishing with a 2:39:xx on the clock and how I would feel if I saw that.  I knew I wanted to start out conservatively so I could push the last 10K, as I have always faded right around miles 18-20 before and the last 6.2 miles turn into an agonizing death march.

After the national anthem and some words of encouragement that were lost in the pre-race adrenaline buzz, the starting gun or cannon or mortar went off accompanied by fireworks.  As it was still pretty dark, this made for a very exciting spectacle and pumped nearly everyone to a near-critical high.  I curbed my adrenaline and set off at what felt like a nice easy pace.  I wanted to run the first mile no faster than 6:10, and I ran it perfectly in 6:11.  Somewhere in the first mile, I met up with a half marathoner who wanted to run 6:05s, so we decided to run together for as long as we could.

About two miles in, I passed Jenn Bigham, our own Jeff’s wife, who is scary fast and was shooting for the Olympic Trials standard of 2:45.  As she finished only seconds behind me at the Jenny Kuzma Bergen 5K in August, I knew she was in sick shape and if she had a good race, I had to be on my A-game to avoid being passed by her later.  She looked very smooth and relaxed so I wished her luck before gradually pulling away.

Miles 2-8 were ran at a comfortable with the half marathoner, and we split anywhere from 6:04 to 6:14.  After seeing the 6:14, I picked up the pace a little and my half marathoner friend fell back.  I split 6:07 and 5:56 for the next two miles.  I didn’t want any sub-6es, at least not so early in the race, so after that I made a concerted effort to stay around 6:05 pace.  From mile 9 to 17, I split fairly consistent miles in the range of 5:59 to 6:08.  The crowd thinned out considerably once the halfers finished, and I was running alone for the remainder of the race.  There were some people who went out too fast that I picked off every now and then, but nobody was running my pace. 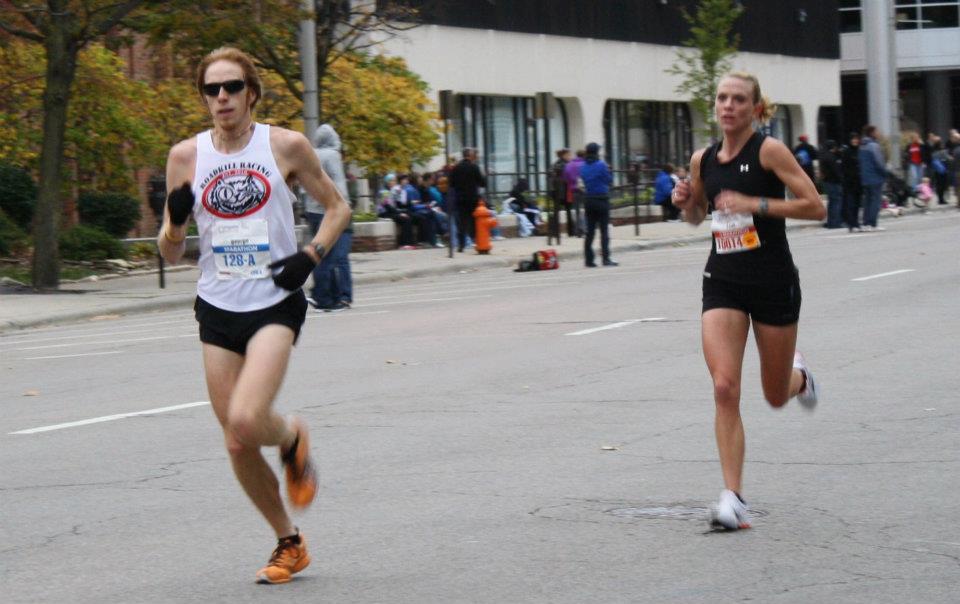 Mile 17 was another sub-6, but then disaster struck.  The 18th mile had a few small inclines, tiny things really that I wouldn’t even have noticed in the first 10 miles, but after running 6-flat pace for almost two hours, any little bump becomes a mountain.  These “hills” slowed me down, as did the hairpin turn and the wind, which picked back up here.  I was shocked and dismayed to see that my 18th mile was a 6:30. 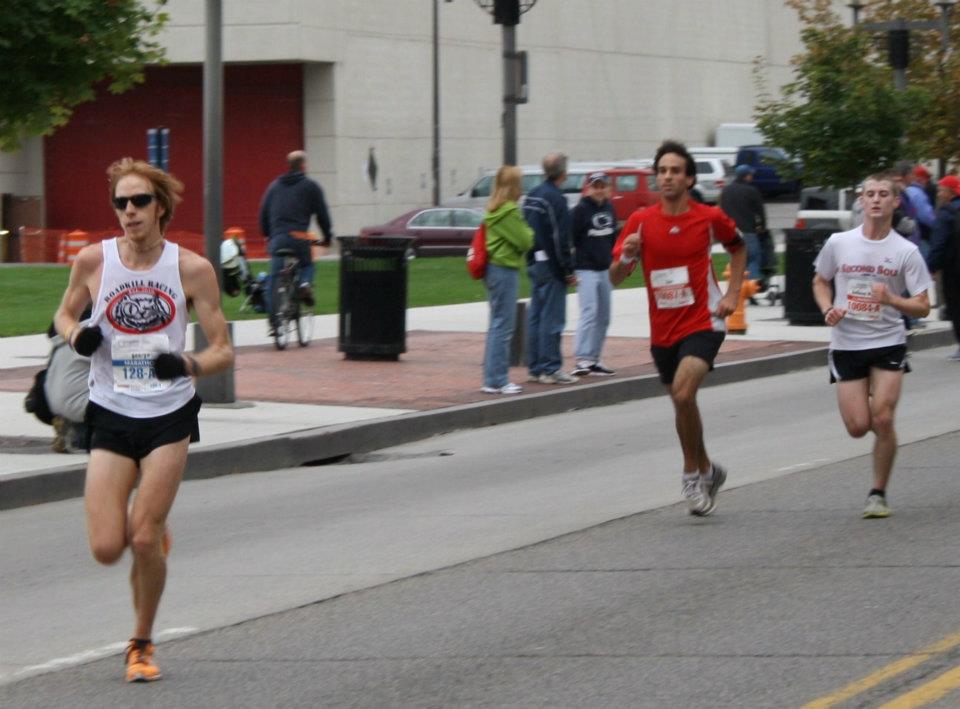 As I crossed the 26th mile marker, I could hear people cheering and knew that while I was not going to break 2:40, I was having the best race of my life and feeling strong.  I actually managed to kick and run strong to the finish!  I don’t think I was sprinting per se, but I was running all-out.  I crossed the finish line with a final time of 2:42:19, for an average mile pace of 6:12, and a nearly 6-minute PR! 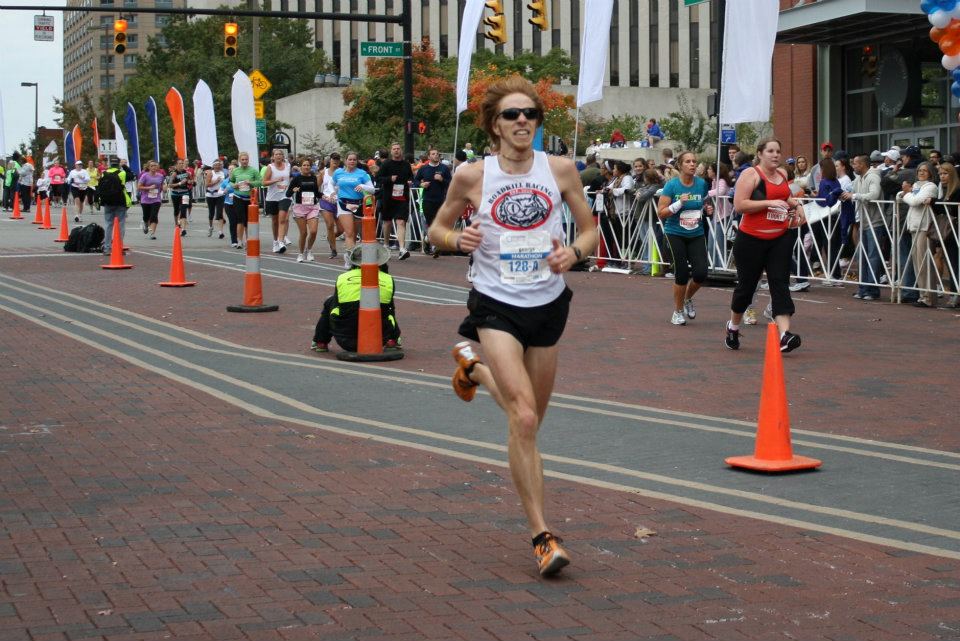 So while I didn’t break 2:40, I ran the smartest, best marathon ever, and was able to actually push the last 10K and finish strong.  I could have tried to go for the 2:39 mark right from the gun, but I knew I stood a better chance of running conservative and still getting a great time, as opposed to running 6:00s or under for the first 16 or 18 miles and blowing up the last 8-10 miles.  I still know a sub-2:40 is within my grasp, but for the time being, I am proud to say that I am a 2:42 marathoner!