Since Josh will soon make a post about his own 5 miler and steal my thunder, I need to attempt to take the limelight for now. Yesterday was Johnny’s 5 mile race in downtown Rochester, which serves as the unofficial beginning of the road racing season in town. Last year I ran a huge PR in 27:14, which at the time was a breakthrough race for me. I have been feeling pretty fit lately (although my mileage is only now getting back up to where I’d like it to be), so I was hoping for some moderate improvement.

The field was noticeably less strong than in previous years. Aside from a handful of elite-looking out-of-towners, the only people who I might hope to compete with were Dave Bradshaw, Derrick Jones, and Master’s extraordinaire, Jim Derick (note that I’ve never been very close to beating any of these guys in any race longer than 1 mile). I hoped to keep pace with whichever of them did not start uncomfortably fast (faster than 5:15 for the first mile) for as long as I could.

Gun goes off. The few elite out-of-towners bound off to the front, and I quickly tuck in behind Dave Bradshaw and Derrick Jones because there’s a slight headwind as we run South towards the University of Rochester . The race is an out-and-back with its turn-around point nicely placed at the traffic circle on campus. The three of us and Jim Derick trade positions a bit through the first half mile. 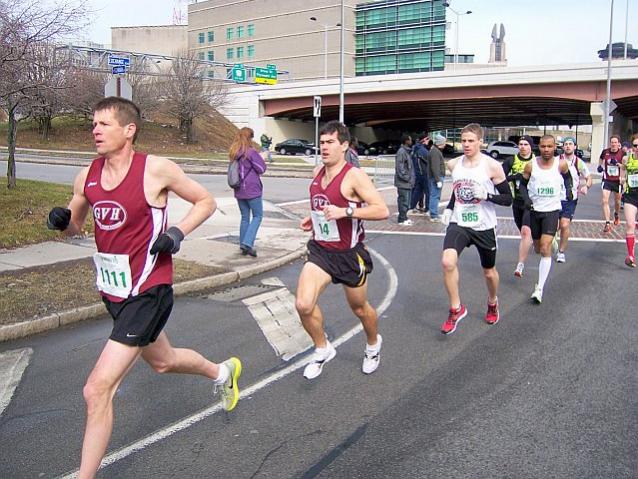 The pace feels fast but controlled. At some point Derrick Jones disappears (I later found out that he dropped out) and Bradshaw opens up a small gap between me and Jim, off of whom I am drafting shamelessly. I’m feeling great and the pace still feels under control, so I make a quick move to close on Bradshaw. It’s fun to be running with the big guns. It almost feels like I belong up here. I run behind Bradshaw for a few hundred meters but quickly realize that I’m in over my head because he’s accelerating. I let him go. Jim Derick comes up and I let him pass me on the Ford Street bridge so that I can restart my shameful drafting (in my defense, he’s a far more accomplished runner than me!).

We come through the first mile in 5:18 and I’m feeling OK. Jim noticeably accelerates after seeing the split. This became the most crucial point of the race for me. Maybe it was a moment of weakness caused by the extra effort required to climb up and over the bridge, maybe it was the constant headwind that still had some measurable impact despite my drafting, or maybe it was just me being too scared to say “screw it” and compete, but I made a conscious choice to just let him go. What was I thinking? I know I can run that pace. I have run a 4:36 mile on zero speed-work and a 16:07 5K with very little mileage base. Lately, I’ve been nailing some fast workouts while slowly upping the distance. My fitness is there. Perhaps I can’t quite sustain it for five consecutive miles, but I need to at least find the capacity to take a risk and put myself in that position. 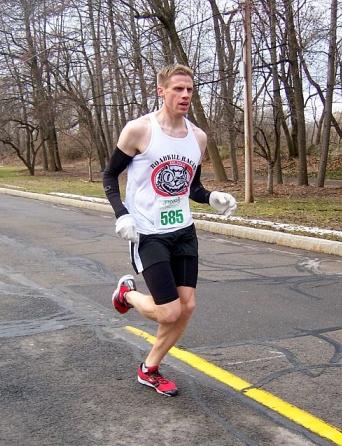 As Jim slowly drifts away from me, I realize that there’s no one else nearby, and as I start to battle the wind solo, a sinking feeling sets in: A mediocre-at-best race is unfolding. I don’t even bother checking my second mile split (but I do press the lap button to satisfy my post-race curiosity). I make half-hearted surges, trying to convince myself that Jim—now well over 20 seconds ahead—is no longer increasing his lead. Sadly, this just doesn’t hold true.

A small hill leads up to the turn-around. I see the elites striding down as I’m just barely starting the ascent. Ryan Pauling is in the lead car with Eric Boyce and the other USATF folks, and he shouts at me to “FOCUS MIKE!” I know he’s right, but UGH, I already regret putting myself in this position. The turn-around provides an opportunity to see the competition behind me. Matt Roberts is about 15 to 20 seconds back, and a few very strong looking women are 15 to 20 behind him. For most of the third mile, I run opposite to the masses who are still approaching the turn-around. They shout words of encouragement like “You’re almost there!” and “You’re still in it!” At the time, this exacerbates my feelings of defeat, but I know they mean well. I happen to check my split for the third mile: 5:43. Ugh, UGH.

At this point, my effort level really begins to disintegrate. I’m coasting, drifting, and floating through the last 2 miles. I start to hear bystanders cheering someone behind me, which is rather irksome. Am I going to have to fight off someone down the stretch? (At the time, this is not a welcome realization, because I am “running weak,” very opposed to Josh’s catchy slogan “Run Tuff”) I come through mile four in 5:38. It must have been the tailwind, because my effort level surely had decreased, if anything. By now, I’m actually feeling somewhat relaxed because I’ve been running tempo pace for three miles after actually racing the first one.

Coming back over the Ford Street bridge, I start to hear footsteps. I don’t look back, but I know it’s Matt Roberts. I traverse the bridge and enter a mild downhill section of the course. Something clicks, and I start to pour on some speed. But I’m still hearing footsteps and cheers behind me. As I run by Corn Hill landing, I estimate that there’s about a half mile to go. Now, due to the substantially increased pace, I am genuinely starting to feel some pain. I can still feel Matt back there, only 15 or 20 meters behind. I really drop the hammer. It hurts but it feels good. Why didn’t I do this earlier? This is why I’m out here. To race. To compete. 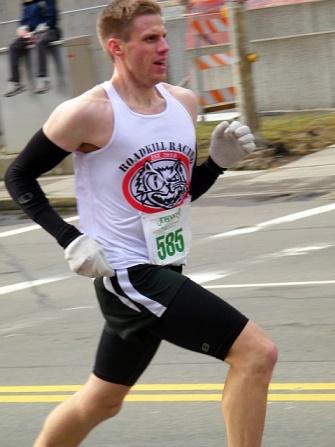 Matt never closes the gap, and I finish in 27:36 with a 5:17 last mile for 8th place. I thank him for pushing it at the end, and he tells me he was “running his face off but couldn’t make up any ground.” It feels good to hear that, and at least I’m not left with a completely sour taste in my mouth. It was satisfying to race hard down the stretch, and it was a much-needed wake up call regarding what I need to do to road-race at a level at which I believe I am capable.

Results are here, a video from the lead car of the start (where you can see me slowly falling behind the elites) is here, a complete set of race photos are here. Next up is the Spring Forward 15K in three weeks at Mendon. Josh will be there, too, and since we are accustomed to working together quite well, I am really looking forward to it.