I look forward to this race every year. This year it was a great excuse to leave my new Annapolis, MD place-of-residence, take a train to Poughkeepsie, NY and catch up with Josh, Lisa, and their family, and also to support Camp Wa Wa Segowea, a summer camp that the Perks family has been involved with for many years. I had managed to win the race in its first two years of existence, so my goal was to establish a three-peat. My training has seemed mediocre of late: sub-par mileage but some decent track workouts here and there. I won two un-competitive 5Ks (in February and April), running in the 16:40s, and I ran a very disappointing 10 Mile race in March. I told Josh the night before the race that I’d be thrilled if I could run 16:15 or so, but that I wasn’t too optimistic. My primary goal was to win….PIE and glory (overall and age group winners received home-baked pies!).

The Wa Wa Wally Waddle 5K is organized by Josh and Lisa, and it takes place at Vassar Farms in Poughkeepsie, NY. The race course is a mostly flat out-and-back on a smooth dirt road, supplemented by a couple of ~500m laps around a somewhat bumpy grassy field. I caught up with Josh before the race; he said that there might be some stiff competition this year including three Pough-town locals who are fully capable of running in the mid-to-low 16s for a 5K. I was beset with both excitement (a more competitive race is more fun) and dread (a more competitive race hurts more), and proceeded into my race-prep routine. 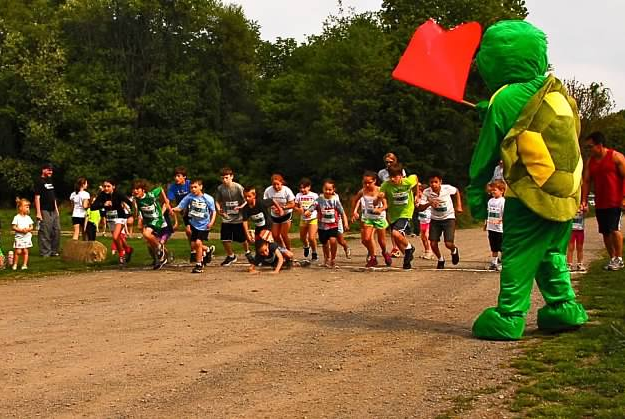 I could only find a picture of the Kids Fun Mile start, so let’s pretend that the photo above was for the 5K. Just replace the little kids with strapping, svelte-looking distance runners and the giant turtle with Josh because he was the one who gave us the start-command. The 5K also had a lot more entrants than the Kids Mile (200+).

The first few hundred meters were pretty typical. Some high school kids sprinting off the line and then fading back after 200m, etc. As we rounded the grassy field, a lead-pack of four formed: myself, Mike Chow, Mike Slinskey, and Zach Kudlak. The cool thing about racing alongside two other Mikes is that it feels like everyone is cheering for you.

When we got back onto the dirt road, I accelerated and put a small gap on the others. I’m not sure if I slowed or if they accelerated, but they reeled me in as we approached the first mile mark. The pace felt fast but I wasn’t wearing a watch. Mike Chow checked his and informed us it was a 5:05. After the first mile Zach and Mike S. dropped back but Mike Chow and I kept pushing the pace. We traded off slight leads or ran shoulder-to-shoulder.

Mike seemed to be very strong; we continued to trade surges as we approached the two-mile mark, which he reported we crossed in 10:20 (5:15 second mile). Having run the course the two previous years, I had staked out the 2 mile mark as a good point to try to drop competitors. There is a small hill that crests just after that point, so it seemed like a decent spot to break away from another runner who might be hurting a bit more than usual. I surged, but not hard enough because Mike matched my move.

We continued to run shoulder-to-shoulder for the next half mile, when I finally managed to open up a small gap. I don’t fully recall (because I was very tired at this point) but I sensed that the gap had formed due to him slightly falling off the pace rather than my own acceleration. I never looked back, but I figured that I had 5-10 seconds on him with about 1/2 mile to go. The photo below confirms that 5 seconds was probably an overestimate. 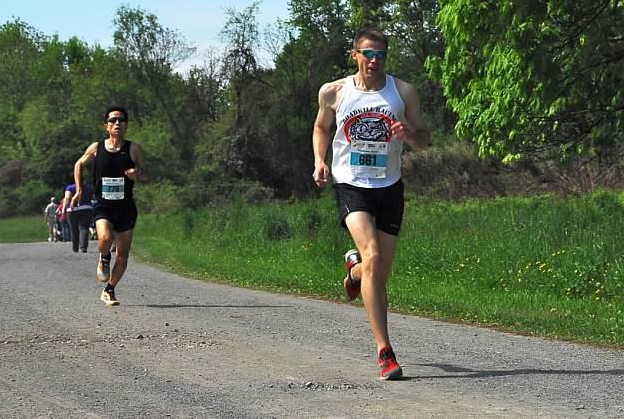 Only one loop of the grassy field remained, but I was gassed. The finish line couldn’t come soon enough. Josh was standing near the last turn directing traffic, and he informed me that I was about 5 seconds ahead. With only about 250m to go, 5 seconds sounded plenty, so I made no effort to kick. Maybe I should have, but whatever. Mike never threatened my slim lead in the closing meters, and I came through 1st place in 16:13, while he was three seconds back. Kudos to Mike; he ran a really gutsy race that significantly benefited each of our finishing times.

I was really happy with how I was able to respond to tight competition. It was the second-fastest 5K I’ve ever run, only beaten by a 16:07 on an indoor track in December 2010. It was really good to see the Perks family, and I’m looking forward to catching up with RKR in Rochester at the Lilac 10K next weekend! Full results are here, the full photo album is here, and the below is me with my newest race shirt alongside the Waddle female champ, Marisa. Also below is a race video that Josh put together. 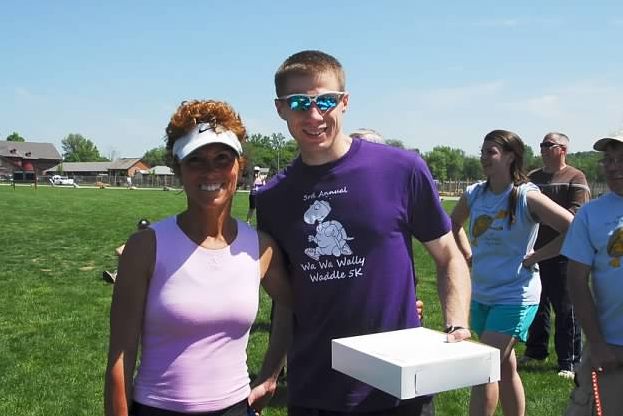