When you have been running and racing for as long as I have you don’t often get to celebrate a new personal record.  That goes double for the distance your race most often, in my case the 5k.  On October 26th 2003 I ran the Ghostly Gallop 5k in 16:06, here are a list of things I’ve done since that date.

In short, it has been awhile.  For years I’ve been telling myself I was on the verge of not only running a new 5k PR but of finally breaking 16 minutes.  So many times I was sure one or both of those things was going to happen.  In the last few years I’ve run under 16:30 a dozen times but I’ve never gotten under 16:15.  Staring 40 in the face, I was beginning to think 16:06 was as good as it would ever get for me.

That is until Sunday when Lisa and I ran the Fairport Foundation 5k, a small first year 5k in the village less than a mile from our house.

Going into this race I hadn’t done a speed workout in almost a month, and my most recent race was 3 weeks earlier at the Finish Strong 5k where I ran a very average 16:27.  Like all the 5k’s I’ve run in the last few years I crashed and burned in the last mile of the Finish Strong after feeling great the first 8 or 9 minutes.  No matter how well my training has been going I can’t seem to find that finishing gear when it counts.  I decided a few weeks ago to stop wearing a watch during my training runs, and I carried that over into this race.  Knowing my pace doesn’t really seem to do me any good, I just spend my mental energy during the latter half a race thinking about time instead of thinking about running.  My goal for the Fairport 5k was to stay relaxed the whole way and not obsess over my time.  I figured with my lack of workouts I would either be very rested or very flat.

My plan to not obsess about time was thrown off a bit by someone giving out mile splits.  5:05, which is what I usually run the first mile of a 5k and normally I feel pretty good running that pace, this race was no exception.  I tried my best not to dwell on my split and just focused on keeping a quick cadence and tried to think light and fast thoughts during the long out and back stretch along the canal.  The way the course setup the 1 mile and 2 mile markers were only 30 meters apart, so not only did I get my 1 mile split but I heard the 2 mile split as well- 10:20.  My normal reaction to hearing my 2 mile split is “shit now I’ve got to run a 5:xx to break 16:00 minutes” but on this occasion I thought “wow, that is the easiest 10:20 I’ve ever run.”

The last mile, a minute in the lead and closing in on a PR.  This is when not having a watch really paid off.  For some stupid reason during the last mile of a race I’ll start looking at my watch.  I say stupid, because I never race with a GPS watch so what do I expect my watch to tell me?  If I look down and the watch says 14:26, who cares, it isn’t like I know exactly how much distance I have left to the finish, but for some reason I can’t stop looking and worrying about the time.  On Sunday I had no such issues, I just hammered home as hard as I could. 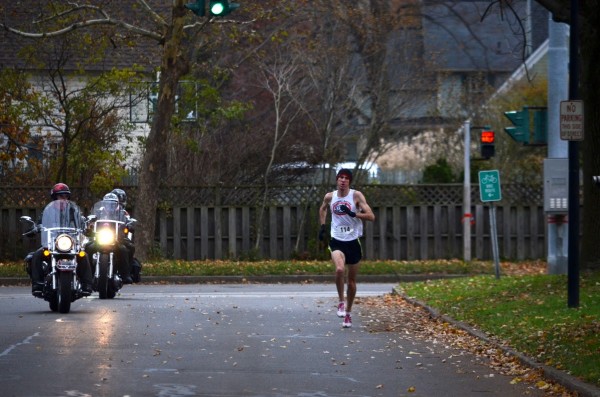 As I turned into the park and ran the final dash across the grass to the finish I could see the clock and knew I was going to run a PR, and I thought just maybe I would break 16 minutes as well.  As I hit the line the clock showed 16:01 but the official time had me at 16:03.  I know what some of you may be thinking… I must be so pissed that I didn’t break 16 minutes.  Well, the truth is I’m really not.  After 10 years 1 week and 6 days I was thrilled to have broken through with a new 5k PR.  Sub 16 might come someday, but for today I am happy to know that I still have some gas left in the tank and on the right day can still run as fast as ever.

As I mentioned earlier Lisa also ran this race.  Trying to squeeze in training with her busy work/life schedule isn’t easy but she has been getting a few runs in a week fairly consistently since early summer and ran a great time on Sunday.  You can see her hammering past the 3rd place woman to seal her top 3 finish. 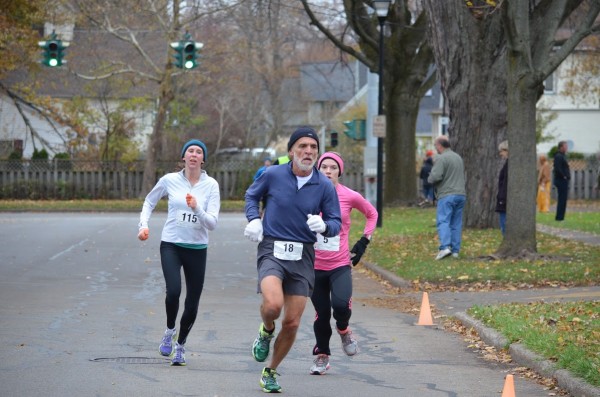 All Photos taken by Mary White